Let’s get this party started back huh?

What is up my Cheeky Little Monkeys? Man it has been far too long since I’ve sat down and typed an article. I’ve been away far to long my dears. I’ve missed you all and want to get you all looking to me again for your daily special brand of 100% grade a Madness.

First, let’s get this out of the way. The matter of business I was dealing with was the seperation of Seras and myself. Sometimes things just fall apart kiddies. 800 years is a long time to be together with someone. It’s not easy to stay together that long. I just needed some time to process things. Memories needed to be filed properly etc…Anyway…I’M BACK!!!!And what am I going to lead off with?…MORE DEPRESSING STUFF!! Let’s just get it all out of the way because I want to mention it and then next will be a Travel Report from Universal Studios Orlando.

First order of business, Wrestlemania 30. We are 5 days removed and I still can’t believe it. I’m so…I don’t even know the word…shocked? Depressed? Flabergasted? On April 6, 2014…the Streak…ended. Now a lot of you would wonder why that would hurt. Especially a Cheshire Cat….I attach to things. The Streak was something that made people happy. It made people believe in an invincible titan. A Deadman…that couldn’t be put down. There are some that didn’t care about it. That believe wrestling is staged, I guess it is…but you know what…so are soaps. So are reality shows…You think Teen Mom, The Kardashians, Duck Dynasty are real? Let me tell you, if you could see what I see it would be just as bad as when the Streak ended. We all have our false realities and stories and this was one that was truly epic. When it happened…silence went over the whole crowd…I thought people were going to riot. The ref couldn’t believe it, Haymen and Brock couldn’t believe it…and the look on Takers face. He deserved better. That man gave you everything Vince and you….well frankly you took a shit on him. And Brock of all people…that disrespectful little shit. I won’t get into that…I won’t la la la la la! Anyway!!! I don’t think this will ever get to the Undertaker, but if it does…Undertaker…you were my first hero. You will always be the invincible Deadman in these eyes. Thank You! Thank you from the bottom of my soul. 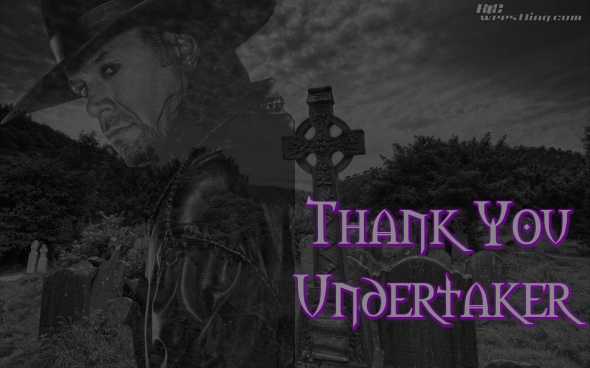 The rest of Wrestlemania was good don’t get me wrong…but I’ll never forget when the Streak ended….

Next bit of sad news…the passing of Wrestling Legend and Hall of Famer, The Ultimate Warrior. The story just makes you sad. The man finally patches stuff up with Vince. Gets inducted into the Hall of Fame, shows up one last time on Raw…then drops the next day. What the fuck kind of luck is this? The Streak and the Warrior all in the same week…nay days apart! It has been a bad week to be a fan. Emotional as hell. My heart goes out to his family. The most I can say, is at least he got to enjoy that spot light one last time. At least he got to experience that again before he went. I’m sure it made him happy to the bottom of his soul. He looked it. 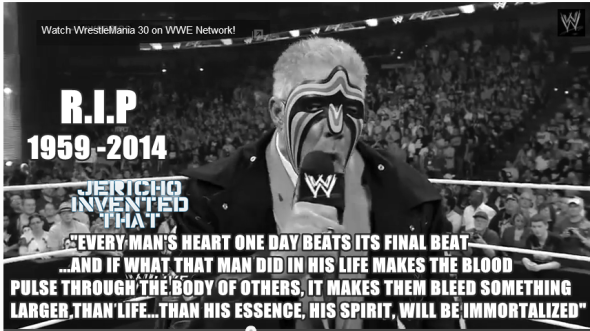 That being said…let’s start the madness machine back up huh? Let’s get this party back to full throttle eh? LETS MAKE THE HEAVENS TREMBLE AT THE FACT I’M BACK HUH!? Welcome to my Madness! This is a new Malice…with new tricks…Welcome to the Tea Party! THE MAD TEA PARTY!!!

I would have loved to do a news article this week. As a matter of fact had one planned. But this week has resulted in tragedy. Most may not know I’m a fan of wrestling. Not sure if it’s the fighting or the drama…but it has always entered my life at one time or another. I especially loved wrestling from the early 90’s on up. About 2005 I fell out of it and then recently had my interest fully re sparked. Possibly one of my favorite characters to step in the squared circle, wasn’t even a wrestler. While most kids remember the Paul Bearer as a horror host….I remember a different one. I remember The Undertaker’s demented manager. He was my Paul Bearer, and his real name was William Moody.

My earliest memories of Paul Bearer was him following Undertaker to the ring with his golden urn in hand. I remember the way he would squeal out his catch phrase “Ohhhhh Yes!!” You couldn’t not pay attention to him. The perfect compliment to my favorite wrestler. He was really one of those damsel in distress type managers…I use that term “Damsel” loosely by the way. He never seemed to be able to stay out of trouble. And he was so short and round, the only chance he had was to blind side you with that urn. Still though, you loved to see how they were going to keep him away from the Dead Man next. I don’t think the sports entertainment industry will ever find another like him.

He was only 58 when he passed away on Tuesday of gallbladder complications. Was wondering if he would come back for what may be The Undertakers last Wrestlmania match (I say last because Taker is up there too!) Just was very shocked and saddened. I would have loved to have met him. Interesting fact, did you know he really was a mortician? Kind of adds to the creepy feel of an already macabre character. He will be missed. If you would like to know more about his grand history in wrestling, click HERE!

Well, that’s all for now…currently planning out some article schedules. Just really bummed even typing this. Paul Bearer…Rest…In….Peace.