I would have loved to do a news article this week. As a matter of fact had one planned. But this week has resulted in tragedy. Most may not know I’m a fan of wrestling. Not sure if it’s the fighting or the drama…but it has always entered my life at one time or another. I especially loved wrestling from the early 90’s on up. About 2005 I fell out of it and then recently had my interest fully re sparked. Possibly one of my favorite characters to step in the squared circle, wasn’t even a wrestler. While most kids remember the Paul Bearer as a horror host….I remember a different one. I remember The Undertaker’s demented manager. He was my Paul Bearer, and his real name was William Moody.

My earliest memories of Paul Bearer was him following Undertaker to the ring with his golden urn in hand. I remember the way he would squeal out his catch phrase “Ohhhhh Yes!!” You couldn’t not pay attention to him. The perfect compliment to my favorite wrestler. He was really one of those damsel in distress type managers…I use that term “Damsel” loosely by the way. He never seemed to be able to stay out of trouble. And he was so short and round, the only chance he had was to blind side you with that urn. Still though, you loved to see how they were going to keep him away from the Dead Man next. I don’t think the sports entertainment industry will ever find another like him.

He was only 58 when he passed away on Tuesday of gallbladder complications. Was wondering if he would come back for what may be The Undertakers last Wrestlmania match (I say last because Taker is up there too!) Just was very shocked and saddened. I would have loved to have met him. Interesting fact, did you know he really was a mortician? Kind of adds to the creepy feel of an already macabre character. He will be missed. If you would like to know more about his grand history in wrestling, click HERE! 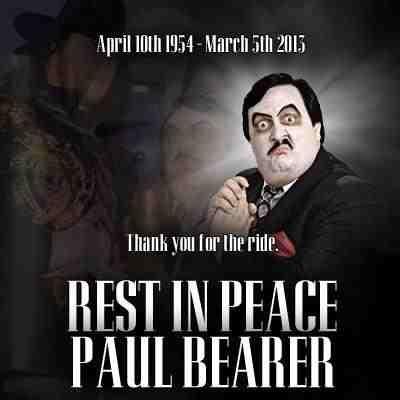 Well, that’s all for now…currently planning out some article schedules. Just really bummed even typing this. Paul Bearer…Rest…In….Peace.

This entry was posted on March 7, 2013 by malicepsychotik. It was filed under Psychotik News Asylum! and was tagged with Obit, Paul Bearer, Percy Pringle, Rest In Peace, The Undertaker, William Moody, WWE.