Hello, Freaky Darlings! 5 Days out from Halloween Horror Nights…so this is our Road to Terror. What better way to pass the time than talk more about Halloween Horror Nights? I kind of wanted to lead out with a prediction list of what we think the best HHN houses this year will be. At the last second though, I decided to take a look back at our picks for the best of the best. The ones that still to this day stand out in our heads the most. These are what this years event has to shoot for. Will one get knocked off the list this year? Who knows! So which mazes made the cut? Let’s start with 10 huh?

Coming in a number 10 is the second incarnation of Screamhouse from HHN 16. What made this house in particular stand out was the atmosphere and smells. The Facade was very well done. I remember it well. The interior just blew me away. All of the Caretakers in this house were awesome. Made sure to swing those blades they had right past your head. I also remember the smell of dirt as you wandered into the crypt area. That smell has stuck with me for years. In fact, I get flash backs every time i walk past the mulch at Walmart… 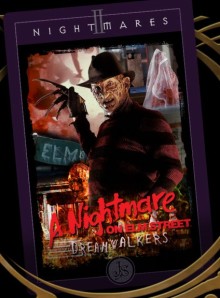 Good old Freddy Kruger finds himself in the number 9 spot. Dream Walkers had so many things done right. Out of all the New Line slasher houses, this one was the best. It had a great story leading into it. Your mind was just turned topsy turvey in this maze. To set up the house you walked through a tent where Freddy had some human puppets pump a sleep drug into it in large doses. From there you are put right in front of the iconic house from the films. As you walk through your very own nightmare come to life, you were brought some pretty epics scenes from the film. Ending the house in the boiler room really clinched it for me. I don’t ever remember a dull moment to be honest. Just a great house all around.

This house was just darling. Some of the most cheesy, campy, and sometimes- very good- horror movies are those based on Holidays. This is what this house was about. An old Horror host at the end of his rope decided to make one last stand of it and show the big wigs what real terror is. While he is doing this to them, he takes you on a tour of Holiday terror. It was great walking through and trying to guess the holiday. Arbor Day was the hardest to guess. I loved the nuclear explosion in Presidents Day with the zombie presidents. That was just great. Definitely an idea you hope to see revisited down the road.

Had to look to the back of my vault for this memory. HHN 15 was my first exposure to the event. It was also the last year they did the event across two parks (LOT’S OF WALKING). This year always holds a special place in my chest. This is one of those memories occupying that spot. This house had a grand entrance to an old house. Basicly everything you would be afraid of as a kid, this house took it to the next level. Dark corners, weird noises, half cracked doors, the monster under the bed…anything you can imagine turned to pure nightmare fuel. If you weren’t careful, you could have missed The Storyteller in the attic reading a story to a victim on a bad of spikes…with an anvil hanging over his head…The house was also built so well if you managed to get ahead of your group, you could enjoy scaring them as well (I hate you Andrew!) 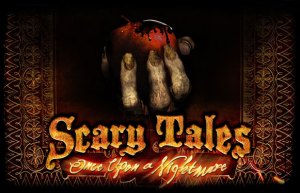 6. Scary Tales: Once Upon a Nightmare- Halloween Horror Nights 18: Reflections of Fear

You didn’t think I would leave Reflections of Fear out do you? This is the only Scary Tales house I have been through, but damned if it didn’t leave a lasting impression. So many things right with this. What is not to like about fairy tales gone wrong. You had a footless Cinderella, a full mad Alice (She was eating poor March Hare! The nerve!), and all of this mess caused by the Evil Queen. What still sticks out in my mind the most was the Alice in Wonderland Scene and the Oz scene. Like I said the Oz scene you were transported to a mad tea party gone terribly wrong (Poor Hare never saw it coming I’m sure..) The Oz room took you into a corn field with demented versions of the classic characters. Dorthy had been tied up and murdered. Scarecrow was left to pluck at her brain. A very Angry tinsman would either A) swing an Ax at you or B) Squirt you with oil. The Lion would roar as you left the room. You really did have to see the characters for this as they were pure nightmare fuel.

Top 5 people here we go. What a good way to start it off. I was so please this house delivered. I’m a big fan of Poe’s work and it was nice seeing it brought to life. You had a shit ton of scares. Lots of misdirection. I think my favorite scenes were from the Tale Tell Heart”, “The Masque of the Red Death”, and one scene that involved Poe and Virginia. Lot of great effects were used. If you are a Poe fan or not, you could have found enjoyment in the house. Everyone loves a good Madman. Could they do this house again…Quoth the Raven…Eh Maybe… 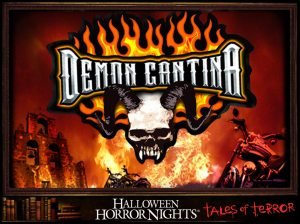 Here is the other part of HHN 15 that sticks with me. This was my first year, this house was my first one ever! Demon Cantina is a nice homage to From Dusk Till Dawn. You enter through the front of the bar and travel into hell! Out front they had a very cool puking animatronics. Your greeted with a broken bottle against the bar. Scenes that stand out in my mind…An exploding toilet, a strobe light room with dancing demons, and the end. The end you were greeted by the Devil himself. My friend and I hit the ground ala’ Waynes World, screaming “We’re not worthy! We are worms!” (Just a joke of course, I know Lou…he looks nothing like that and is a terrible Yahtzee player) This will always be so special for me….

Words can’t accurately describe this house. It had everything going for it. Hands down Universal’s best Zombie house yet. The Walking Dead house this year has a high bar in this house. The story was the US Government re-took America and started these training facilities to help people learn the finer points in putting to rest the undead. You start out kind of light-hearted. Just going through a shooting range no big deal. Then they pull off what could be the best “OH SHIT!” moment in history. You see lights and smoke when a float crashes into power lines, crippling it indefinitely. Now things are real and the undead get their revenge. To add to it, the people who were training you have now joined their ranks as well. From there you exited to Zombie Gras…that is for a different list though…

2. Saws and Steam: Into the Machine- Halloween Horror Nights 21

So, HHN 21 kind of ran all over this list huh. It was a good year…what can I say. This almost squeaked into the number one spot. It was narrowly beaten. I really had never been into a house that told a story better than this. I wish this house could be turned into a movie. This maze was based on the Scarezone of the same name the year before. In the world of Saws and Steam water is almost impossible to find. That is until someone realizes the human body is made up of 70% water…Into the machine shows more of that world. A group known as the Elite ask people to make the sacrifice on their 31st birthday to “Give of their liquid.” so that they may better the cause and feel no more pain. By doing this, they would enter “The Horizon”…or paradise. Obviously it was a load of shit and as you walk through the maze there is nothing that screams paradise (Unless of course you have a hard on for steam punk then…well this will give you quite the chubby) So many good scares, I don’t know where to start. I think they end was really awesome with the guy in the old style Scooba suit splashing a water curtain at you. They must have gotten a lot of water. (Also important to note this was the final house featured at the Jaws location…sad I know) 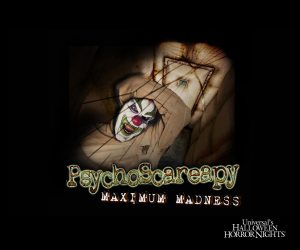 Here we are..number one! How can you go wrong with an asylum that has been taken over by the inmates. Guess they should have thought twice before taking in good old Jack the Clown. Story is simple…Jack comes in, drives the crazy insane, and you are there for a full-scale riot. Even the nurses have gone loony! Many scenes stand out in my mind. The empty hallway that when the lights go out and come back on it’s filled with inmates. Or rather was it the room covered in shit! (Smelled real…IT SMELLED REAL!!) Or the hulking juggernaut that followed Seras out telling her he would “eat her babies.” Either way you slice it this house was fun, scary, detailed, and told a fun story. Oh! And it featured the best icon of them all, Jack the Clown.

That is all for now Darlings! Stay tuned tomorrow when we look at the best Scarezones!