Hey there Darlings! Of all the interviews I’ve done, I never dreamed I would get to sit down with a legend of pro-wrestling. I’ve been a fan for a long time, and this next interview was with one of my favorites. A Two time ECW World Heavyweight Champion…an impressive 39 time WWE Hardcore Champion…the one…the only…RAVEN! I got a little too excited, and sort of choked  back a little. But the man still did a great interview, and gave me some pretty good advice. The little Psychotik loved him to death, it was awesome. You didn’t tune in though to see me talk about that…you came to read an interview. Top Hats on Darlings…

Malice: In your early career you had a couple different names and you made the switch to Raven. What made you decide to switch your persona to Raven?

Raven: That’s who I wanted to be. You know you get stuck with personas because the companies want to give you stuff and with ECW I was allowed to come up with my own thing.

M: You were able to compete in all major wrestling federations WWF, WWE, WCW, ECW,  TNA out of all of those, which one gave the best experience?

M: As wrestling changed over the years, do you think it was better then or now?

R: I don’t watch it now so I have no idea. I would assume by the ratings it was better then.

M: What do you think, in your opinion, was the reason WCW kind of  fell to the way side?

R: There are too many reasons. It would take me too long to discuss it. 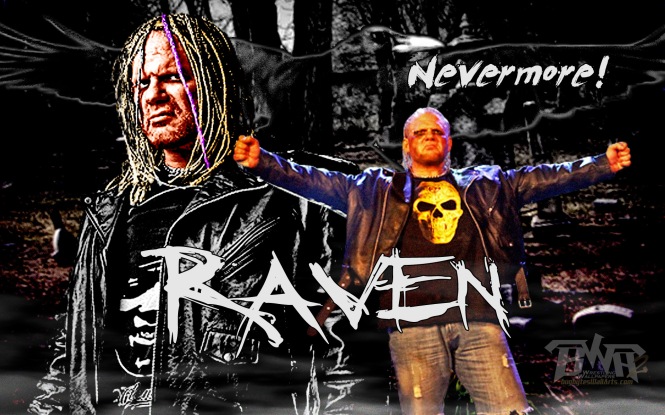 M: One thing I had looked up, you held the hardcore title 27 times…

M: Really? Which they still hailed you as the most reigns with one title. Did you ever look back on that and think ‘I held that record?’

R: Nah I don’t look back on anything. That is in the past. You gotta live in the now.

M: I used to love watching the hardcore matches. What went into those? It’s kind of hard to fake getting thrown into a brick wall, getting hit in the head with a chair, trash can or kendo stick.

R: What you see is what it is. There is no other way to describe it. I mean you know the creativity was usual mine. Well obviously my opponent had input too but I tried to make mine more creative than everyone else and add more psychology so mine would stand out.

M: What have you done in your career that you are most proud of?

R: I don’t know. I’m not sure. I really don’t know. Probably being successful at it. When I got in the business, I was the smallest guy in the business. The fact that I was able to make it and have such a long running career after consistently burning so many bridges and being so small comparatively. Now I’m 6’2  when I started I was 5’11 220 at the most. When I was all roided out I was 220 so I never lifted weights after 160.  My graduation weight and Jericho’s, I mean I’m much bigger than Jericho but he graduated high school at 185, I graduated at 160. And that was after 2 years of lifting so you could imagine how small I was. And I didn’t have any abs so I was small with a thick waist.  The fact I was able to make it with my size and lack of athleticism speaks volumes I think.

M: Of all the things you brought to the ring, what was your favorite?

R: The Frankenstein doll or the ficus plant

M: So you had a storyline that was offered to you on Sunday Night Heat involving the Seven Deadly Sins…can you tell us a bit about that?

R: No they didn’t offer it. I came up with it. They botched it. One of the best storylines I ever came up with but they never let me do it right. And so it just never happened but what I had originally created was so fantastic, so brilliant, so clever.

M: What advice would you have for a young start-up into the business?

R: Wrestle in High School, Wrestle in collage…they like that. Get abs, they like abs. The leaner you look the better. It’s not about style anymore it’s about appearances. Eddie Guerrero was 180 lbs but he looked like he was 230. He wasn’t very tall but his build made him look much bigger. Don’t get me wrong much guys are a lot bigger. He just happened to be a smaller guy that looked bigger. Then you got guys like Billy Gunn who are legitimately 6′ 5″  and 280 lbs shredded. Anyway, just do that and watch as much wrestling as you can.

M: Last question, one of the most controversial moments of your career was when you crucified Sandman on ECW. After you did the deed, you were then made to go out and apologize. My question is, would you have done it differently or not at all in hind sight?

R: Of course I would have done it, it was brilliant! The only reason there was controversy was because Kurt Angle was there. If he wouldn’t have been there, if they hadn’t been trying to recruit him, there would have been no controversy. it would have gone over like it was supposed to, I wouldn’t have had to go out and apologize. It would have worked like a charm. But because Kurt Angle was there, he got pissed. Then Tazz and some others jumped on the band wagon. Normally they wouldn’t have said anything, or if they did it would have been in private. It had the right effect though. There was just a hush over the crowd, everyone was silent. But it was a good kind of silence. But whatever you know, it happens…

M: I actually read a comment that went something like, “Well why didn’t you tie him to a Star of David?” and you answered, “Well then we would had to roll him out of the ring!”

R: No it would have rolled away on its own. It wouldn’t have had the symbolism. it had nothing to do with religion. It was all symbolic.

M: so it’s not about the religion or the politics it’s about the message basically…

R: Yeah, you know I was the martyr for societies dysfunction and so I was going to make Sandman feel my pain..that’s all…which we would have explained as the story went but we didn’t get a chance to because it got kabosched.

Did you like all of that? I loved it! Not often do I get struck fanboy style. This was one time for sure. But you know, the advice he gave me caused me to hit the rest of the interviews with a ferocious vengeance. A lot of other people that weekend thought he was a bit grumpy. But to me, I thought he was him. He was a legend in the flesh. Real great with kids. Jazzy loved him. He made a new fan. Stay tuned Darlings…we have a Scream Queen up next!!!