Good Morning, My Freaky Darlings! I’ve been dying to talk about this for some time now, but the craziness that’s called life has prevented me from doing so. My favorite ride at Islands of Adventure recently got a little more than your average refurbishment. The Amazing Adventures of Spiderman got a new look, and let me say it was damn impressive. Normally, when you see a ride go down for refurbish, it’s just paint and a few minor tweaks. Universal announced almost a year ago that the ride was going to get a big retorque. Not only were they going to redo the old screens and bring them up to date with new High Definition ones, but they also planned to introduce a more realistic ride video. I have been eagerly awaiting the chance to ride the new tricked out Spiderman ride since that tidbit of info went across my screen. Last week, I got my chance! Before I get into this though, let me take you on a trip back to what made the ride so special before it had the “Pimp My Ride” experience…

The Amazing Adventures of Spiderman ( 1999 )

When Islands of Adventure first opened back in 1999, this young Psychotik couldn’t have been happier. I was finally going to get to go to a theme park involving my childhood hero’s, The Marvel Comic’s Superheroes. I was excited for Jurassic Park Island too, but I could have spent ALL DAY in Marvel Island. I remember the first ride I wanted to go on was Spiderman, unfortunately my cousins wanted to ride Doctor Dooms Fear Fall (Something I didn’t mind at the time. Their first choice was The Incredible Hulkcoaster. Which since I was less experienced with rollercoasters, I was absolutely terrified of! I knew the Fear Fall would take that idea right out of their head) So alas, I had to wait. When we did get to ride it, we had to wait like 2 hours. (Average wait time back then…and you people bellyache over 30 minutes) It was soooooo worth it. A 3D romp through the pages of my favorite superhero! HOW COULD YOU GET ANY BETTER!?

As you can see...Day and Night difference between the two...

The main story line follows Doc Ock and the rest of the Sinister Syndicate (Hobgolblin, Shreik, Electro, and Hydroman) stealing an experimental levitation gun from Stark Industries. J.J. Jameson not having any reporters left to cover this mess, sends you and your other fellow riders in the experimental SCOOP vehicle. Now the SCOOP is supposed to be the most amazing invention to hit media. Capable of going anywhere, and getting any shot…how could anything go wrong? Well, after a warning from your friendly, neighborhood, wall crawler…the screwy thing takes you right into the hideout of the Sinister Syndicate. And in true J.J. fasion, he opens his big yap and get’s you found. From their the Syndicate tries it’s best to catch you while Spiderman tries to save your silly ass. You first encounter Electro, who gives you a rather…eh hmm…”Shocking” experiance (No ladies he didn’t pull his pants down…family friendly) From there you rattle on over to a room withe a tank where you have a close encounter of the symbiotic kind. As you are trying to escape, Doc Ock fires a few levitation blasts over head making some pieces of the stolen Statue of Liberty float above you. Escaping down, what seems to be a sewer way, Spidey and the SCOOP get a few second break before you are attacked by Hydro. As you get hit by a flying pipe your sent to a room where Doc Ock busts through a brick wall to roast your hide (I mean it too…) From there you jerk back and forth before you bust out onto the street. Think your safe, think again! Hobgoblin tries to blow you away with some pumpkin bombs (I must also add that he has one of the most quotable lines from the whole ride! lol) Spidey saves you from getting blown up, but unfortunately finely get’s bested by Doc Ock and you get blasted with the levitation ray sending you up, up, up…all the way to the top of the sky scrapers. Spiderman tries to web you down sending you on one bumpy ride as you get pulled around through the air while a fight ensues. The end result? The Doc reverses the effects of the ray, sending you on a simulated 450 foot free fall! Spidey spins a web just in time, setting you on the ground where you can get safely back to the Daily Bugel! So tell me…What could possibly be wrong with this ride entailing an overhaul? 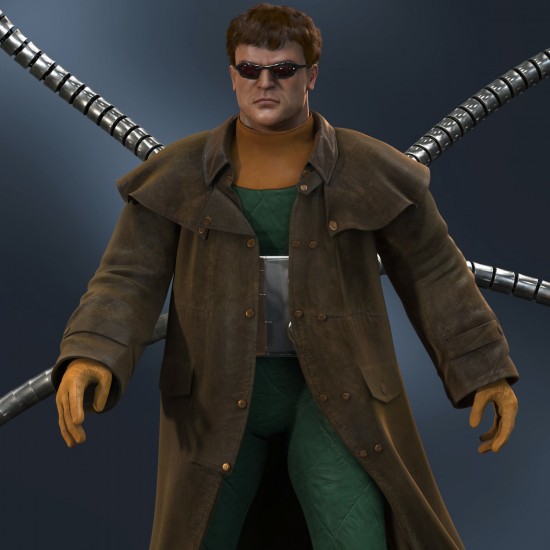 "You would think a revision of my graphics would have helped to make me thinner! They did offer me this happening new jacket though. I suppose I will let the animators live...for the time being!"

Simply put, it was made in the 90’s! The animation wasn’t the best, the 3D was sort of fuzzy, and there were even a few scenes (that up until now) you could completely tell what was going on unless you were a seasoned veteran. STILL!!! This ride was completely innovative and way ahead of it’s time. Even after the release of Harry Potter and the Forbidden Journey some, including myself, still held this ride in higher regards. Now that you get the idea for the ride, let’s talk about what they did to make an epic ride even better…

"I don't know what Ock is complaining about! I look absolutely SHOCKING!!! Ah ha ha ha ha ha ha haaa! What theirs broccoli in my teeth?! Where...!? NOOOOO"

The Amazing Adventures of Spiderman: The Ride ( 2012 )

To start off with, like I said, they added some High Definition screens to provide a much better picture and better 3D effects. Then they totally remade the ride video to look more realistic AND have even more depth. The difference between the two is just staggering. Were the old video made the rooms have a bit more depth, the new ride video really gives you the feeling of being in a wide open space. With much better video and the HD screens you are able to see all of the scenes the way they were meant to be seen with no blurring. You don’t even get the weird cross-eyed effect that most 3D attractions give you. The new way that the characters are all presented are just out of this world as well. You can actually see the stitching on Spiderman’s glove. Doc Ock has a sort of combination between Spiderman 2 version and the comic book. Shreik just looks absolutely terrifying. You can even make facial expressions out on some of the other characters!

"Well at least they didn't give me the "Sam Raimi" treatment! Ha ha ha haaa!!"

In addition to all of the above mentioned, sound effects and the ride soundtrack were made much better. The soundtrack now has a much more modern rock and roll tone to it. The added sound effect of squealing tires and many others add even more to the experience. Quite possibly one of the coolest additions for fans is the appearance of Stan Lee! (If you look at the couple running away when Doc Ock levitates the theater marquee and then again at the final scene with the man in the green sweater….you will see Stan “The Man” Lee) I just couldn’t believe how different the ride was, but at the same time how it was still my old childhood favorite. You could say the ride was…well…”Amazing!” (I will post a video of the ride below from Coaster Force…Mind you it in no way captures the overall effect or feel. But if you are veteran as I am, you will see some of the changes that have been made.)

It still amazes me how with Shreik we go from mildly threatening to...."OH MY GOD THAT THING IS GOING TO KILL ME!!! DEAR LORD WHY!? OH GOD WHYYYYYY!?" You people think I'm over telling it? Go ride it ya' chump!

In closing, I encourage all of you to make a trip to ride the new version of the ride. I assure you, it is worth the trip. Any self-respecting Spiderman fan will just love it. That’s all for now my Freaky Darlings…I’m rather liking this regular posting thing! Now I just have to think of some more to talk about…alas…this is the only problem.

This entry was posted on April 6, 2012 by malicepsychotik. It was filed under Universal Orlando Resort News and was tagged with Amazing, amazing adventures, IOA, Islands of Adventure, Marvel Comics, Ride, Spiderman, travel, Universal Orlando, USO, vacation.