My Freaky Darlings it does appear that the Summer Box Office season is upon us! How did I kick it off? With Marvel Studio’s new installment….Thor! What a way to start this summer off it was. I was really impressed with this move. Especially taking into account I didn’t think it was going to be that good. I’m not really a big fan of The Mighty Thor comics, and just really thought the character a pretentious prick! (Yes, I know, He’s supposed to be that way at first) I’ll tell you, if you felt the same way I did about ye olde God of Thunder, this movie will make you do a complete 180! At any rate…allow me to organize my thoughts a little better and paint a much better picture for you in this… 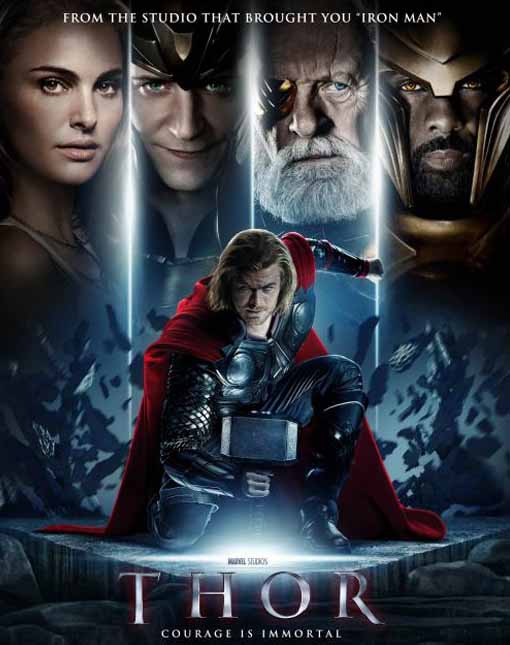 Jeez, where do I start with this movie review. The whole damn thing was just so great, it’s to hard to pick. I suppose I could start out with the story line. As most of you may (or if you haven’t been paying a bit of attention) don’t know, this movie is about Thor. Thor is the norse God of Thunder, or at least sort of is in Marvel. You the see, the Asgardians are moire beings from another realm, one of nine. More or less, they helped us out in war against these other realm beings known as The Frost Giants. Because of that help, they became revered as Gods. This story is the first words of Sir Anthony Hopkins, who might I add plays a FIERCE Odin, as he tells the story to his two sons. These two sons of course are Thor and Loki. You than flash forward to the day that Thor is supposed to take over as King of Asgard. However, as things go in story’s like this, it doesn’t happen. “Somehow” the Frost Giants get into Asgard undetected by the all seeing Heimdallur (who is EPIC!!). Long story short, they are destroyed by “The Destroyer,” an Asgardian machine seemingly made out of metal and flame, and Odin just wants to leave well enough alone. Thor doesn’t see things the way his father does. No, he wants to bring the fight right to the Frost Giants and teach them a lesson. Odin of course tells him no, and as you might have guessed by the fact that there is a movie, he doesn’t listen. Thor and his legendary warrior friends head out to the land of ice to pay these big blue giants a visit. Things start out good but quickly turn to an all out shit storm. Odin comes to their aid, not very happy might I add, and takes them all back to Asgard. Thor and Odin get into a father son squabble that ends in Odin stripping Thor of his power and banishing him to Earth. Odin then throws Thor’s trusted hammer Mjolnir after him telling the hammer that “Whoever wields this hammer, if he be worthy, shall possess the power of Thor.” It’s now up to Thor to learn his lesson on Earth and gain back his powers to save Asgard and Earth from certain peril.

*Anymore questions check out the trailer below…

What I liked: OK, so I’ll admit that was a rather long summary. Belive it or not that is only the first 30 minuets of the movie! There is one hell of a story in this film, and every bit of it keeps you glued to the screen. Never do you hit a slow point in the movie, which is rare to see. The character development is very solid, letting you even get to know Thor’s warrior friends! Casting was absolutely superb. After seeing who was cast as the new Spider-Man, I have to say I lost faith in Marvel’s casting ability. Let me assure you that if this movie is any prelude to what Captain America: First Avenger will look like, I’m already on the edge if my seat. I’ll also add that the movie’s 3D was excellent quality, unlike some 3D movies I have seen. Visual effects and action sequence were top-notch as well, rounding this movie out to be in the top echelon of Marvel Movies.

Oh, before I leave this section, watch for little throw backs to the comic and a guest appearance from another Avenger. The coolest throw back to the comic is when Jane gives Thor his mortal clothes. Turns out they are her Ex-Boyfriends, and his name is Dr. Donald Blake, MD. Incase that didn’t press your geek button, that is the human bound name of Thor in the original comic. The throw back becomes even more hilarious when they have to make a fake identity for Thor using the name to get him out of S.H.E.I.L.D custody. The next little easter egg is in the form of Hawkeye. Pay very close attention to the agent that grabs the bow and arrow to stop Thor’s break in to the Mjolnir crash site. The agents name is Clint Barton. It happens so fast that you keep wondering, until you hear the name. A nice little addition to a great movie.

What I didn’t like: Not much! Really the only thing I disliked was the little tail scene at the end of the movie. I was really looking forward to a lead out to Captain America: First Avenger. Instead, you are left with a sort of villain hint. Somehow Loki is either possessing or influencing Erik Selvig. Nick Fury gives Erik a sort of box with a device in it. He says that if the device is fixed it could tap into unlimited power. I’m not sure what the device is, but I guess they did have to start hinting off to the antagonists in The Avengers movie, just wish the scene would have made more sense.

* Watch the video below and make your decision…

At anyrate, I give this movie 5 out of 5 Top Hats! If you haven’t seen it yet, I implore you to find a way. Excellent story, great effects, superior casting, and all the other little things that make a summer blockbuster great helped me to this rating. Make sure to stay tuned for my finishing of my older reviews from a couple of months back….

This entry was posted on May 28, 2011 by malicepsychotik. It was filed under Reviews! and was tagged with Marvel, Marvel Comics, Marvel Studios, Might Thor, The Avengers, Thor.