Dusker of the Month for September: Athena Hollow

Take It Off! Getting Personal with Athena Hollow

Dusker of the Month for September, Athena Hallow

Malice: We have a real treat for Dusker of the Month this month. She’s our very own video game loving, anime watching, horror fan, Super Mom, web designing, Adult Model…..ATHENA HOLLOW everybody! So Athena, I have never asked this before….How did you stumble upon From Dusk Till Con? (Yeah, that’s the question…what did you think it was…perverts…)

Athena: Actually, it’s because of my Father in Law. He informed me of the FM convention. I checked out the site, and at the time, the official forum was being hosted on FDTC. I signed up and found myself surrounded by people like myself. That alone is a scary thought… more than one person who thinks like I do. Needless to say, I stuck around and *ALMOST* got to meet a lot of you while in town for said con. Unfortunately, life sucks and it didn’t work out. Oh well, always other conventions 🙂

Malice: One of the hardest things about getting to know someone on a forum is you only see whats posted. You never get to see the whole story! Tell us a little about yourself…

Athena: Well, I live a relatively boring life, all things considered. I used to be fun and adventurous, but then I became domesticated somehow. I do however still lead an exciting life by everyone else’s standards. I guess that’s because I get paid to look at hot naked chicks all day.

Aren't the little ones darling...?

Malice: What kind of music are you into?

Athena: I really listen to a lot of different music. It’s hard to narrow it down. Lots of classic rock like Rush & Skynard. Also, J-Pop/Happy Hardcore and acts like Tub Ring, Mindless Self-Indulgence and mc chris. I’m an oddball and not ashamed to admit it.

Malice: Are there any films that have caught your interest?

Athena: Oh man. LOTS of movies have caught my interest. Lately, movies I *want* to see are Inception, Scott Pilgrim & the new Predator flick. Movies I *have* seen, that really struck me, were Salt, Diary of a Wimpy Kid (hilarious, btw) and I finally watched The Mist. Goddamn that movie is a mindscrew. 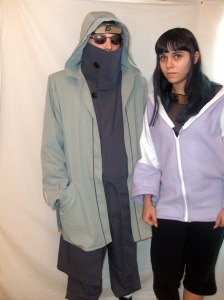 Malice: You’re a fan of anime. Which one’s capture your eye?

Athena: I prefer the more obscure anime and one season mainstream anime. The best I’ve found are FLCL, Saber Marionette series & Angel Sanctuary. If you want super gory anime that makes no sense whatsoever, Angel Sanctuary is where it’s at.

Malice: What about video games. Which ones press your buttons?

Athena: Fallout 3 is one of the best games I’ve ever played. Zombies, Super Mutants and scorpions that can rip you in half with one flick of their pinchers. Currently though, until Fallout: New Vegas comes out, I’ve been playing a lot of Dungeons and Dragons: Online. It’s free, it’s fun and I can get nearly anyone I know to play it for those reasons.

Malice: How often do you frequent the convention circuit? Any favorites?

Athena: I actually am terrible. I have yet to get to a single horror convention. (I know, I know). I am a gaming con kinda girl. That being said, I have gone to Gen Con a few times and there’s a local Bi-Mon-Anime/Sci-Fi-Con that I used to go to regularly.

I do, however, plan on going to the Indianapolis cons next year. Luckily, I *should* be able to get Press Passes and go for free, which means more money for autographs and swag!

Malice: So I’m interested, what got you into adult modeling?

Athena: Honestly, it started as a 9th grade English assignment. We were told to write an essay on what we wanted to be when we were adults. I wrote mine about how I wanted to become a famous singer. (sidenote: I’ve been involved in music since a very young age. I’ve done talent & solo competitions for years, and actually placed in the top 3 every time, if not 1st.) I knew I’d need some sort of ‘edge’ to get noticed immediately, so I figured “Fuck it. I’ll do porn! It worked for Pamela & Tommy Lee!” So called ‘negative’ publicity is the best way to get your name in every newspaper, tabloid and internet blog. It was a sound theory. My english teacher even gave me an A for such thorough planning and originality.

Once I turned 18, I applied to my first site, got accepted and actually have been active on the site since then. The rest just kind of fell into place.

Malice: How long have you been at it?

Athena: It was 7 years this past July. Long time, for most people in the adult industry, let alone in the niche I work in.

Malice: What made you decide to open your personal website, Geek Girls Online?

Athena: It was actually my fiance’s idea. He’s still not too happy with the fact that I just sort of took over the project, back in the first few months. I knew that if I were running things, it would bode better for the future of the site, since I had a background in the adult industry, was relatively known and had a penchant for ethical pornography.

Malice: Have you gotten any strange requests? Anything just out there?

Athena: All The Time! The weirdest are the guys who want me to ‘laugh’ at the size of their schlong. I just don’t get it. They want me to do this while I’m camming, in public chat, where everyone can hear me laughing. Oh, and the guys that want to roleplay family stuff. Those guys freak me out just a wee bit. Which is an impressive feat, in and of itself.

Malice: What are your hopes for the future of your site?

Athena: Eventually, I would like to integrate a more social aspect of the site. I also have been working on setting up games to integrate into the site, but that has been proven to be a bit more difficult that we could imagine. Also, daily articles for the GeekZine (our currently monthly magazine) would be nice. Oh! And a presence at all major gaming conventions would help to make it a more household name.

Malice: So it’s a tradition here that I ask you a round of totally out the pocket questions….are you game?

Malice: A nun and a Trucker walk into a Church….Can you finish the joke?

(You never said I had to finish it so it was funny!)

Malice: Would you consider a photo shoot….with a midget furry?

Athena: I most definitely would, as long as they were dressed up as an Ewok.

Malice: Would you rather do a spread as Princess Zelda or Tifa Lockheart of Final Fantasy VII?

Athena: Tifa. Zelda is a bitch that keeps getting hijacked. I assume we’d get halfway through doing it and Ganon would break through the door and interrupt.

Malice: If you got to pick your end would you:
A) Get sucked dry by a vampire B) Be Eaten by a Were-Wolf C) Mauled by a Zombie D) Killed by James “Buffalo Bill” Gumb

Athena: Zombie. I wouldn’t have to chance being a twinkling bastard, no waiting till a full moon and dealing with an obviously painful transformation and my skin is sun damaged, so Buffalo Bill would HATE me.

Malice: In closing do you have anything you would like to add?

Athena: Um. Jeepers Creepers sucks. That is all.

Malice: Where’s your one place for Madness on the Web?

Athena: What’s the best place to go for zombies, insanity and mayhem? Encyclopedia Psychotika! (You mean, there’s other places to go??)

There you have it folks! If you are interested in Miss Athena Hollow and feel you can’t get enough, you can follow her blog, Demented Rants or catch her on Twitter. Also be sure to check out her site Geek Girls Online.  Hope you all enjoyed the interview. There is much more madness to come….you won’t want to miss a second. But for tonight…