Very few people can start a new in the film business at 66 years old. I’m had the pleasure of interviewing such a man. Steve Dash is a true Phoenix from the ashes. Out of nowhere he has hit the scene again and hard with several lead and supporting roles in up and coming films. So far he has come back with roles as a Mob Boss all the way to a Control Freak Cop. And the man still has more to come! I hope you all find this interview as enlightening as I have. So with out another word or further delay…..

Malice: I’m here today with Steve Dash. You all may know him as the REAL Jason in Friday the 13th: Part 2, but truth be told he is so much more than that. So, Steve Dash, it looks like you have been busy lately. With several films coming out and more on the way I’m sure. How do you make time for it all?

Dash: Yes I am busy and I am fortunate that I can take as much time as needed to do film work. I worked pretty steady back in the 80s & 90s and had to re-establish my self in 2009 when I got back in the business. Like I said I was fortunate that my reputation preceded me and I was able to work again.

Malice: So I was looking at the trailer for Trust Me, I have to say you make a really convincing Mob Boss. Can you tell me anything about this movie?

Dash: I was doing a film 13 with Jason Strathom, Ray Liotta and several other named stars.

It’s a film about Russian Roulette and gambling on who will live and who will die. It’s not like the Friday the 13, I am one of the many gamblers who is betting on which contestant will win the game. While shooting the film a fellow by the name of Roberto Rizzo, a writer, saw me on set and asked me star in his new film Trust Me as mob boss

Frank DeLeo. He liked the way I carried myself as a bad guy and that’s why he offered me the role. I took it and we shot a short version of hoping to get money to complete the film which we are doing now.

Malice: What kind of research did you do for the role? Any specific inspiration?

Dash: I did nothing, I was just me. I was brought up in an Italian neighborhood in the Bronx and have been around wanna be mobsters all my life, it was easy 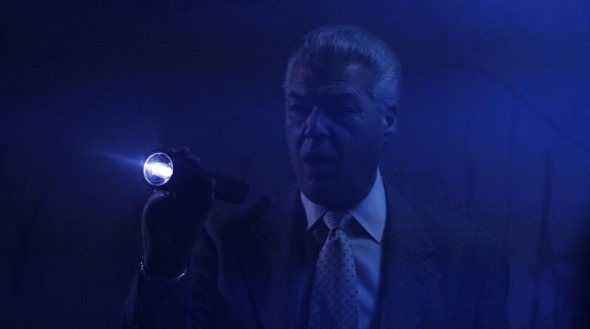 Malice: Another film that looks quite interesting is Emerging Past. How did you come across this role?

Dash: I got a call from my friend Tony Moran who was the first Michael Myers. He told me he was asked to do this horror film Emerging Past and only make a cameo appearance. He told them he couldn’t as he was on the west coast but suggested they call me as I was on the east coast where they were shooting, they were thrilled and didn’t know I was in NY

I called David Madison who was the producer and he explained that they wanted to have several horror names for the film to promote it better for release. He had Tom Churchill the director call me to set up a date we could shoot, we got together and I became Detective Vorhees  name taken from the Jason character I played in Friday the 13th: Part 2.

Malice: Is there anything you can tell us about “Det. Vorhees”?

Dash: He is a control freak who comes onto a horrific murder scene in a basement when a photographer comes on the scene and is snapping pictures. The way it was shot is very dramatic and I give kudos to director Tom Churchill for taking such a small part and making it larger than life on-screen.

Malice: I’ve been keeping close tabs on the upcoming Mr. Hush, ever since I had the pleasure of sitting down with the Director Dave Madison. All of the characters in this movie I find interesting. What kind of character is “Mac”? How is he involved in the story?

Dash: “Mac” is a great character, he is the guy in the film that breaks the tension of what is going on and shows the leading character (Brad Loree) in a very personal way. He’s a very take charge kinda guy, when Mac comes on screen the movie moves in another direction and then all of a sudden you are back in the suspense of what is going on

Malice: Having acted in the movie, what’s your take on the movie? What do you think viewers can expect?

Dash: Since I have only read the script and was privileged to be on set during some of the other shots, it looks like a good horror film. I can tell you this, it’s different. I expect it to be good, otherwise I wouldn’t have done it.

Malice: With Weekend of Fear being your last convention, is there anything your going to miss?

Dash: No nothing, I have done so many conventions over the last 5 years to satisfy my ego that I feel it is time to focus on my new film career. Don’t get me wrong Jason was my ticket but I have a lot more to give and hope to go in that direction.

Malice: I’ve always been interested in stunts. To act the hit is one thing, but to take it is a completely different ball game. You were a stunt driver in Night Shift (1982), is it easier doing acting stunts or vehicle stunts?

Dash: Remember I was an actor first and a stuntman second. I was fortunate enough that one of the top stunt coordinators in the country, Cliff Cudney, took a liking to me and helped me be a stuntman. I think being an actor first was a big help. Back in the 80s I was only 1 of maybe 5 guys that could act and do stunts at the same time. Being able to do both saved film companies lots of money because they didn’t have to hire a stunt double.

Malice: I also couldn’t help but notice you’ve done stunts in one of my all time favorite movies, The Ghost Busters. You stunted for William Atherton, also known as Walter Peck if I read correctly. What type of stunts did you do? You weren’t the one covered in marshmallow at the end were you?

Dash: Yes, I was, I doubled him so he wouldn’t get the junk all over him. I also was involved in the big car crash, when all the cars merge into each other as the ghost comes over the building, I was driving a taxi in the mess.

Malice: Of all the roles you have played, which one is you all time favorite?

Dash: I have to say Frank DeLeo in Trust Me, first of all it was my first lead in a film  and second a lot of the script was written with my personality in mind.

Malice: It was nice of you to take the time with me Steve, before I go is there anything you would like to add?

Dash: I am now 66 years old and on a new film career. I have decided to do only films where I get a credit in the front of the film not the back, in other words I will only do roles that have some meat in them and I can express my creative juices to show what I can do. You would be surprised at how many characters I can portray. In October I am playing a southern sheriff in a film called Alive in Reywood, I hope you interview then when I am finished with that film.

You heard it Ghouls and Guys! Keep on the look out for Steve in some of his upcoming films. There will be a showing of Emerging Past at the Freak Show Film Festival which will take place on October 9, 2010 at 3:30PM at Spooky empire’s Ultimate Horror Weekend. For all of you fans up north,the premier of Mr. Hush at Mr. Hush Weekend of Fear will be October 23, 2010. Both movie’s look to be absolutely incredible, and I can’t wait to review them both! That’s all for today…

Until Next Time… My Freaky Darlings,

((For the full collaborative interview between Trash Cinema Collective’s Primal Root and myself, head on over to From Dusk Till Con))

This entry was posted on September 8, 2010 by malicepsychotik. It was filed under Interviews! and was tagged with Emerging Past, Friday the 13th, Jason, Steve Dash.