My Cheeky Monkeys I have some very exciting news for you all!!! Hot off the presses!!! Boys bring in the pic!!

ARE YOU KIDDING ME!?!?! AND I CANT MAKE IT!!!!! AGHHHHHH!!!!! Damn ministry of Magic is crafty and casted Anti-Vaporative spells over the parks….must of caught wind…hmmm…Anyway! This is happening and some of the details rolling out are awesome. So far one I’ve seen shows magic shop windows. Yes…now you will be able to use the wands you buy in the park. By finding little medallions around Diagon Ally…you will be  able to try out a little magic and see how the other half of your kind does it. I’m just soooooo excited. The only thing better is visiting the Universe those stories take place in.

In other news…not so hot off the presses…some HHN 24 news hit last week. This one is bitter sweet…The Walking Dead will be heading back to HHN for the third year in a row. I’m not happy about this mostly because it appears the deal to get TWD involves AMC’s logo feces spread all over everything. The good part however is this years Walking Dead maze is supposed to be the biggest one in Halloween Horror Nights history. That could be interesting if done right…..Octobers still a long way off my Monkeys…

All things must come to an end, funny thing is this series already did! Harry Potter and the Deathly Hallows: Part 2 marks the end of over a decade of Harry Potter films. I would say that this saddens me greatly, but if you think about it, the time to be sad has come and gone. The last book was released awhile back…at the very least it sucks there is nothing new to look forward to in this series. Still it is with great pleasure I find myself reviewing the end of Harry Potter…Let’s head into this bad boy…. 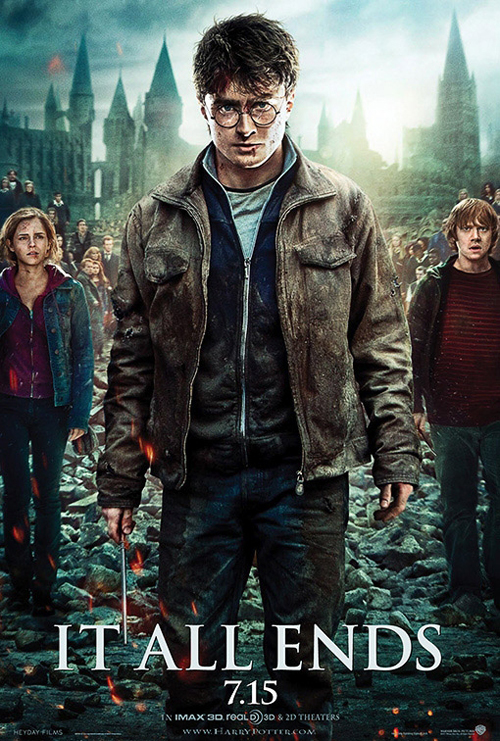 There are so many good things about this movie, I find it hard to pin down just one. I do believe however, I will start with the story and work me way to the overall effect…

This installment has to be the most action driven out of them all. Your really left craving more with each scene. From the Gringott’s escape to the final showdown with Voldemort, your not left with very many slow points. The parts where the action does back off you are left with overwhelming dramatic scenes that keep you fully emerged. I would also like to add that this movie, like its first part, follows very close to the book. The only parts that are really deviate from the book are parts that have to do with scenes left out to start with (Ex. The fate of the elder wand and the epilogue). All in all it’s a very over the top action based drama that will leave you wanting more even as the credits roll. The only thing I will offer you is I have not read the final book in full. I have read parts, and most of the parts I have read are featured in this movie. That being said, I was impressed by the level of attention to detail in the scenes I read. Seldom do you see that in a written word to film adaptation (Ex. See most other films based off a book including some in this series!)

The only way I can describe the visual effects in this movie, is to tell you I was blown away. HP7:pt2 has some of the best visuals of all 8 movies. When you watch, look for one of the earlier scenes with the Dementors surrounding Hogwarts.The scene is one of the best visuals in the whole movie and really sets the somber mood. The Battle for Hogwarts was just too much (But in a very good way). Top this with the fact I watched it in 3D! Might I also add it was nice to see that some people are finally getting how to do the 3D effects. When the 3D fad first came back, so many movies just threw stuff together with no intention of it looking well in 3D (Ex. Clash of the Titans). My only regret is not seeing it in IMAX. I can only imagine how stunning that would have been…

If you haven’t already noticed that these films have some of the best actors in the world (If not just the best choices for the characters) You haven’t been paying attention. I was thinking a few years back about how dramatic the last movies were going to be, and found myself wondering if these kids could pull it off. I’m proud to say in this particular movies you will see some of the best performances of the main three and even some of the veteran actors. I couldn’t have been more taken away by the performance and emotion that the actors and actresses showed in this movie. If this film doesn’t sweep the academy next year, it will cement my theory that the damned thing is rigged! Honestly, Top Hats off to the cast of this movie and this series…

I’m sure you can only guess my opinion of the movie overall being in since I have done nothing but gush over it from the beginning of this review…The whole thing fits together rather nicely to make one of the best films of the summer. Sumer 2011 has given us a lot of big Blockbusters, with still some more to come as the season winds down. As much as I would love to say one of my favorite Marvel movies took my personal award for best film of the summer…I’m going to have to say Harry Potter and the Deathly Hallows: Part 2 takes it! Action, Comedy, Drama, a Dash of Horror, and pinch of Suspense…this movie has it all. It’s with great pleasure that I give this film 5 out of 5 Top Hats…and believe me when I say I would be content with giving it 6…

Sorry I sat on that so long My Freaky Darlings, but I will tell you more about wat has been going on in my life later this week. For now I say I hoped you enjoyed this review. If you haven’t seen it yet, go watch it! If you haven’t watched any of them, go jump on the fad now and become apart of the sensation before we all hurt you! Ha Ha…

Dear Freaky Darlings, I do apologize for the dry spell that has taken over the last couple of weeks. recouping the Holiday is rough, and I have many adventures to share with many more to come. Rest assure the time has been well spent! Tonight, I give you this review of a great movie. Let this wet your chops because there is much more including Dusker of the Month for December! I hope this slacks your thirst for blood!

It’s been ten years since the franchise started and now it is all coming to an end. We all knew this day would come, after all, all dynasty’s have to end eventually. Harry Potter is no exception! So how did this glorious beginning of the end go? The only word that comes to mind is Epic! Lord of the Rings eat your heart out, Hit the bricks Twilight…Harry Potter has taken it to a whole new level of cool! I was absolutely wowed just by how good this movie really was. I was expecting a good movie , but for once my high standards were exceeded! There are many things I liked about this movie, and not a lot I think they could have improved upon. So grab your wands Darlings, and hold that broom stick tight! Here’s the Psychotik Review of… 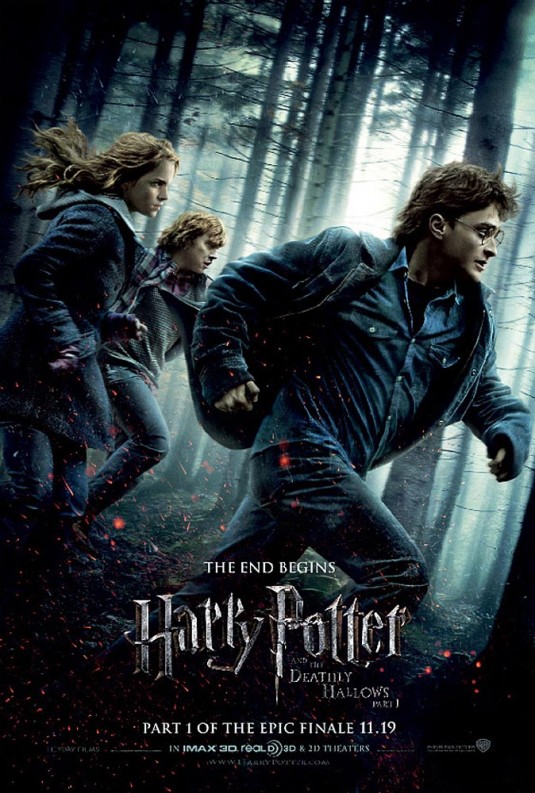 Let’s start with the story. The movie opens with all of the turmoil that is going through the wizard world. With Dumbledore dead, war is imminent.Hermione has to leave her parents and erase her existence for their sake. The Dursleys are leaving (which I’m sure is more good news then bad). The Order shows up to try to move Harry. In a cool special effect you get to see multiple people turn into Harry (Watch for Fleur-Harry…she is the funniest). After they do this they go on a high-speed broom chase through London in an attempt to confuse the Deatheaters. During this chase Hedwig is killed, George Weasley loses an ear, and Mad Eye Moody is killed. This really sets the tone for the movie. There is a lot of sacrifice and self discovery in this movie. I would go a bit further, but I’m more than positive most of you have either read the book, saw the movie already, or have seen the trailer. If not it will be posted below. Rather, I would like to move into the points I love about this film.

Now I could go on forever on what I loved about the special effects, and the casting, how the composer does a masterful job at creating an epic score…etc…We would literally be here all night! Instead, I would like to talk about the story and how it was presented. It was refreshing to see the series go back to its roots and truly show the friendship between the stories core three characters. That’s basically what this part is about. Reacquainting you with Harry, Ron, and Hermione. Not since Prisoner of Azkaban has there been such a focus on the core friendship of the series. It’s understandable to an extent. Movies are different than books. You have to have more about the other characters as well. You should kind of get the picture that those three are best friends.

I also like how the story really paces itself. I was worried about this movie when I thought of how painful Return of the King was to sit through. The last in a series is usually the longest. Thank God they split this into two movies. Regardless of that, the movie does keep you wanting more. Each scene compliments the next. There is a fair amount of action, but it doesn’t over power the plot. The have the perfect mixture of Action, Drama, Special Effects, etc…it all comes together rather beautifully! If these movies don’t end in some sort of Academy Award, I think I will be really cheesed off!

Really I don’t want to give away too much. I would even love to pic out a few scenes for you, but there are just to many! The only thing I can say is if you haven’t seen it you really need to! It’s a great movie, and an awesome opener for the chaos that is going to be in Part 2. I will leave you with the knowledge that Dobby is a little bad ass. You really get to see exactly what those little House Elves are capable of! Also the way they animate the story of the Deathly Hallows is a bloody interesting way to do it. Kind of throws you for a loop! I give Harry Potter and the Deathly Hallows: Part 1 5 Top Hats out of 5, and Malice Psychotik’s HIGHEST endorsement.

I apologize for the breif-ness, but as I said, there really isn’t much more I can say other than it is a truly epic movie, one of the greatest cinema spectaculars of the year, a life changing experience! Your life will mean less for NOT seeing it!

Check out the trailer here: