A Psychotik Review: The Amazing Spiderman

Well Hello, My Freaky Darlings! How did your Holiday go? Good I hope! Well now that Thanksgiving and Black Friday are out-of-the-way, Malicimo is up for some movie reviews. First up, a new personal favorite, The Amazing Spiderman. I was blown away by this film. If you have been paying attention to previous posts about it, I didn’t have high hopes. In fact, I really thought this one was going to be a real stinker. Rather pleasant surprise, I was very wrong. Such a good job was done with this film. So many good things to say…why waste it all on the intro. Let’s chat movie’s shall we?

A Psychotik Review: The Amazing Spiderman

I think it goes without saying, I need to be a little less wordy with my movie reviews. So hopefully, for the last time, I’ll be changing up the format a bit. That being said, let’s talk plot. The Amazing Spiderman is advertised as the untold story. You have the basic plot of Peter Parker gets powers from a special spider (still genetically engineered, face it we know radioactive won’t do that stuff!) A bad decision by Peter, leads to Uncle Ben’s untimely death. And Parker learns with great power, comes great responsibility. It has all of that…and more! First off, we have a change in love interest. That’s right guys and ghouls, no Mary Jane Watson this time round. This time we have the beautiful Gwen Stacy (Played by the very pretty Emma Stone). I should have probably mentioned first the fact we have a plot with Peters Parents (this is where the untold story comes in.) Apparently, Mr. Parker was one of the best genetic scientists at Oscorp (Yes, Oscorp plays the role it’s supposed to as a big bad mean corporation). Dr. Parker and Dr. Curt Connors were apparently working on splicing animal genes with human genes to cure different ailments. Something happens, and Peters Mom and Dad have to leave in a hurry. Flash forward a couple of years and Peter finds his Dad’s hidden documents. This prompts him to sneak into Oscorp, which prompts him to sneak into a restricted area full of genetically engineered spiders…which get’s him bit (we all know the basics of what happens) Moving on, Peter impresses Dr. Connors by using his Dad’s formula to finish what he’s working on. Of course as you know, comic book rules state something must go wrong….and it does and Connors becomes the lizard. Really, you should watch the movie from here, because I don’t want to ruin it!

What did I like? A lot really! The casting was..eh eh hmm…Amazing. Andrew Garfeild makes a perfect Spiderman. He has the charisma, the attitude, and a certain gusto that makes him leaps, bounds, and web-slings above Tobey Maguire. Emma Stone plays a much better love interest as Gwen Stacey than Kirsten Dunst. Sally Feild as Aunt May is a little awkward at first, but she grows on you. Martain Sheen gives a new level of depth to Uncle Ben. You don’t just get to see good ol’ Uncle Ben, you get to see a more realistic side of him. He’s not this glorified father figure, you see some flaws in him…it’s more grounding. I don’t know where to start with Rhys Ifans as Dr. Connors. Couldn’t picture a better person in the role.

The way that they handle Spiderman in general is a big plus. Finally, we have a Spiderman that offers the quips and one liners we all love. That was always something that killed me with the Rami films. The suit takes a little getting used to. I can tell you the one thing that irks me most about it they fix in the game. A simple addition of a red utility belt ties the whole thing together. The thing I love most about the movie that i didn’t think I was going to is the Web-Slingers. Yes, the film actually acknowledges the fact Peter is smart and likes to invent things. Watch in one scene where you can see a door lock invention in his room. Although he doesn’t create the stuff that is turned into web (that’s actually a Oscorp invention. Little pills that contain liquid steel that can be turned into a cable). But, he does create the device that spins it into webbing. Last thing I’ll mention…his super strength. Most people may not realize this, but Spiderman is pretty freakin’ strong…this time it shows and manages to add some rather humorous moments.

Last but not least. The Stan Lee cameo. I’m not going into much detail, all I will tell you is when you see it you will shit awesome bricks…and laugh for days on end. Best one…ever! 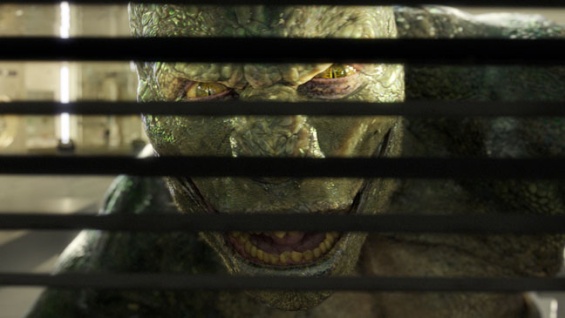 As far as things I didn’t like, the list isn’t that long. The only things I can mention is one scene at the end and how the lizard looked. I just feel he could have looked a little better, maybe a little more sinister looking. I mean he was ok, but still out of all of the incarnations of the lizard, he could have been better. The scene at the end I’m talking about is…eh hmm…wait a minuet…

The scene where Gwen Stacy is trying to create the antidote for the Lizard…virus? Either way, she is making the antidote and trying to keep Lizard out of the lab. In  a last-ditch effort she pulls the trigger for the Halon Gas System. She then proceeds to run through the gas to the other end of the room…effortlessly…and hide in a closet. Well it was all for not, as the system failed to deter the Connors in any way. My Problem? Halon Gas removes all of the oxygen from the area, in this case the room, to extinguish fires in a lab. It’s really the best way to kill a chemical fire. In no way would she or Connors…two oxygen dependent organisms…be able to survive the room without the aid of a gas mask. Now I could be wrong, it could have been some other system…but to the best of my knowledge, systems like this are always halon…and that is what it looks like. If I’m wrong correct me.

P.S Make sure to watch after the credits for a scene you won’t want to miss…could the next film involve my favorite Spiderman villain Green Goblin…only time will tell….

This entry was posted on November 29, 2012 by malicepsychotik. It was filed under Reviews! and was tagged with Amazing, Andrew Garfeild, Emma Stone, Gwen Stacy, Movie, Rhys Ifans, Song, Spiderman, The Lizard.