Welcome to the Grid!…TRON: Evolution

Hello, My Freaky Darlings! So, after an Mansinthe fueled night of fun, I feel like my batteries are charged and I’m ready to blow the whole worlds mind…That being said let me tell you what I have ben doing for the last little bit. For the last month I have been compiling data…I came to the realization I needed some fun material. With that I came to the conclusion that I wanted to review some video games and movies. I needed some time to catch myself up to speed however, and this is where the dry spell has come from. My friends and my lovely have recharged my batteries to past full, and for the first time in a little bit I feel I can sit here and entertain you fine ghouls and freaks! What better way to do this then to open straight into the best gaming experience I had to offer. Not just that but the movie opens tomorrow so really it’s just fitting. So it’s with great pleasure I tell you…

Welcome to the Grid!…TRON: Evolution

This game was a very visually pleasing experience. I really can’t wait untill I get a new T.V. to enjoy this game further! To fully set you in my mind-set, all I have to go into this series is the hype. I have never seen TRON and of course I have never seen TRON: Legacy. All I have to work off of is the hype and the trailer. Also, it is noteworthy that I am never to fond of Motion Picture to Gaming media type games. If it has anything to do with a movie, it usually tends to suck poo covered donkey balls! This game is a true exception. Before I give you my rating I will break things down into groups: Story, Graphics, and Game Play.

The story you follow bridges the gap between TRON and TRON: Legacy. Telling you exactly how the take over came to be and explaining the genocide of the ISO’s and the rise of Clu to power over the Grid. You play a new Moderator Program created by Flynn to investigate the Murder of one of the ISO leaders, Jalen. From here you are thrown into a conspiracy that involves an Evil Program Virus, Abraxas and Clu killing Tron and Flynn. This takes you on a wild ride across the grid to find out the truth and attempt to save the Grid. Not wanting to reveal too much plot, I will stop there.

Really the game does a good job at pacing an interesting story. There really isn’t too much predictability. By that I mean obviously you know a movie is coming out that involves Clu taking over, and Flynn and Quorra fighting him. So realisticly you know what the ending is. There was no way for you not to know how it was going to end, unless you spend your time in a drunken haze (Or with a coat hanger trying to tickle your brain!) The middle story though is pretty impressive! You start out thinking the plot is going to be just he Abraxas Virus, then it goes to Clu double-crossing Tron and Flynn, then to Mass Genocide, then to…I’m not going to ruin it! For a video game based on a movie, they did a pretty damn good job keeping you entertained and then making you think you have an exclusive bit of story. I for one am now going to be able to watch TRON: Legacy with a percent margin of .76% more understanding then the asshole next to me! “Who’s that Quorra girl? Well I know that! Maybe you should have played the game…! MWHAHAHA!!” “How did Clu do it? Why is Flynn in the game!? I know and you don’t! Sit in your confusion and rot foolish mortal!” The only thing l you will find as a let down is the very ending. Mostly this just happened because I was so swept up in the game I lost touch of my original preconceived ending…Why was I so swept up? Well that brings us to the next part of the review!

Graphics
This game is every bit as visually appealing as the trailer to the fucking movie! I’m not even kidding. And this was even on my old Methuselah of a TV which is tiny as all get out! I can’t wait to put this on a flat screen and see how it all pans out. You get so swept up in the pretty surroundings honestly some times that makes you screw up. It just kept me saying “WOW! Look at that!” This even inspired me to want to see a theme park for the Grid. If it looks that cool on a video game, how cool do you think it’s going to be in person?

He’s stunned by the beauty…

On a more technical note, I didn’t really notice any lag, there were no glitches to speak of, no trapping your self in a wall or falling into an endless abyss the really did good with the surroundings. I understand that the design when you think about it is pretty simplistic, but they went above and beyond to deliver a very visually pleasing atmosphere. This helps so that even when you are getting your ass handed to you, even when you are about to put your head through a wall…you can still look at that screen and say, “It’s just so damn pretty! I want to spend all day there riding my light cycle and throwing my disk at people!” Speaking of Disks, Light Cycles, Getting your ass handed to you, and wanting to put your head through a wall…that brings me to my last section!

The gameplay in this game is the only thing that I had room for improvement on. On one hand the amount of stuff it allows you to do is just awe-inspiring. The way you move through the game keeps you on your toes so that there is never a dull moment. You don’t spend a whole lot of time just straight running through the game. A lot of it is death-defying acrobatics much in the style of say, Prince of Persia. The combat system is pretty simplistic. You cycle through your different disc mods using the D-pad and the other attack buttons remain the same. controlling the vehicles is pretty linear too. More or less they are there to keep it fresh. The Bike is the best one. It is by far the funnest to play with. It’s also noteworthy that the leveling up system is pretty cool. Now for my room for improvement. 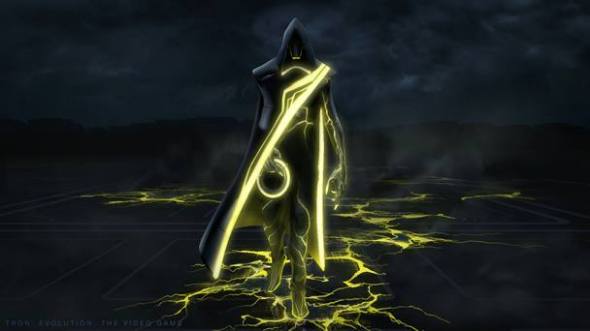 You think my battles are hard, wait till you see my glitches…they will tear your mind apart!

There were moments that you wanted to pull your hair out. If you come across a new enemy, you better pay close attention to the scan read out. If you miss how to kill this new foe, you are going to go through fifteen times of dying and doing it again to figure it out. Maybe even right down a note or two about them as you go so in the final stage when you go through the gauntlet, you will know what to do. Also, if you get Derezzed too many times, the music and sound effects tend to go a little screwy! Some times it would just bottom out and completely throw me off. Also some of the angles will kill you when you are doing a long stretch of acrobatics. Most of that was my fault though. I was spoiled by the navi cube in the very beginning because I was under the impression I was going to have it the whole time. (My bad for paying more attention to the colorful scenery and not enough to the wank talking to me!) The Tank levels also will drive you up a wall! It’s sort of difficult to get the hang of them. Once you do, it’s a done deal. I just feel they could have made it a bit more smooth.

On a separate note I want to mention the Multiplayer. I don’t include Multiplayer in the main reaction from the game, mostly because I think it is utter bullshit for a game to rely on multiplayer to save its ass from having a crappy story mode. Fighting games of corse are the exception to this, but you know what I mean. If you don’t know what i mean again there are three possibilities: 1) you just don’t understand games in general 2) you get your jollies by pouring acid in your ear 3) you love FPS’s, and are going to try to defend to the death their honor! With that out-of-the-way, TRON: Evolution has a really decent multiplayer mode. It plays much in the fashion of an FPS. You run around killing the other hapless gamers on the grid in a timed death match. The added coolness is you can have levels that are just straight forward battles, or you can have a little more open range, and jump on your light cycle to whoop some digital ass! I love how in addition to the awesome concept, you can gain levels and powers for story mode by playing in the gaming grid. So that if you just can’t win against a boss, go spend a little time practicing your mad skills, and then go back a derezz some BASIC scum!

I was really pleased with this game. Decent Story, Great Graphics, and Above average Gameplay make me round this review out at a solid 4 out of 5 Top hats. It comes highly recommended especially if you are a fan of TRON. So go out and rent it or buy it, and see what you think! All I can say is that I’m now fully interested in this series just because of this game! Kudo to you game designers, Thumbs up!

Be sure to stay tuned for more reviews on some newer games and some games that are a little older that I played anyway. Things are going to even out here a little pretty soon. Also, I have not forgotten the comic idea for Shaggy and Todd or my short stories. They are coming along nicely. I just want to make sure that they are more than just “Up to snuff” for My Freaky Darlings.Thats all for tonight, so…

This entry was posted on December 16, 2010 by malicepsychotik. It was filed under Reviews! and was tagged with Tron, Video Games.