Posts tagged “The Hand that Rocks the Cradle”

Chatting it up with Ernie Hudson

Hey there Darlings! Been a while I know. Lot’s of crazy busy stuff. Family gone crazy, Seras get’s a mortal job, the little Psychotik figured out how to vaporate, and some how a Carnivorous Raglefant Troll from my laboratory. By the way if you live in Florida and see this very large creature with very large teeth…I advise you to run as fast as you can. Getting back to business, I have a very special interview to hand over. At Fatality Fest back in June I had the pleasure of meeting the one and only Ernie Hudson. I was thrilled! This man is in two of my top all favorite movies of all time. It was such an honor to meet such a film icon. So get the proton packs ready, and don’t cross the streams….

Chatting it up with Ernie Hudson

Malice Psychotik: You are in my top 2 favorite films, The Ghostbusters and The Crow. But your career goes a lot further than that. Do you have any personal favorites out of all the movies you have done?

Ernie Hudson: No I just like to work and some films turn out a little better than others but I just enjoy working. The Ghostbusters  movies, The Hand That Rocks The Cradle, Congo, The Crow I love those. You always put your best in and some turn out good and some don’t.

MP: One of the biggest debates between Ghostbusters fans is, which one is better 1 or 2.  Was there one that you liked better?

EH: I think the first movie was more original. I think it was actually a great movie. The second one was more family friendly but not as creative. So for different reasons I like them both but I just thought the first was really out of the box and just really original. The second one wasn’t as original but little kids find it much more accessible. 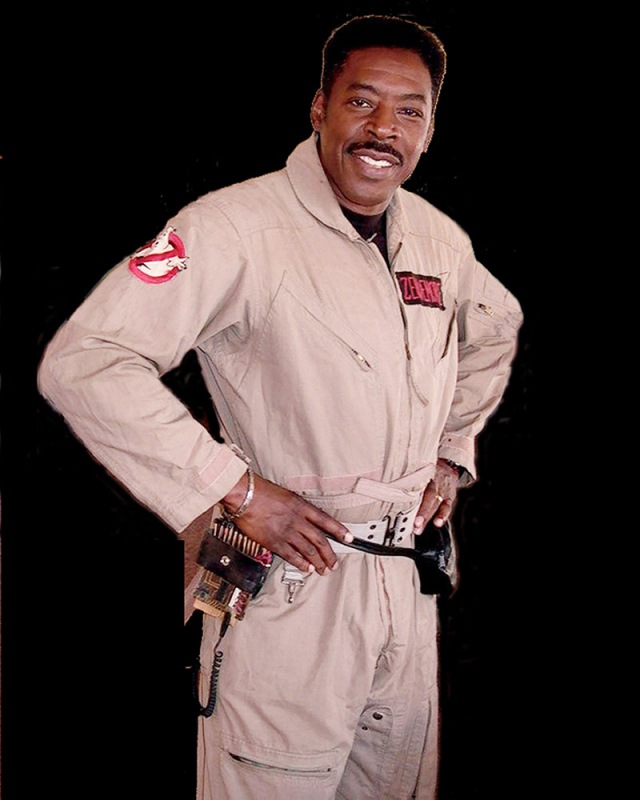 MP: The video game, what sort of experience was it? You guys hadn’t been together in so long.

EH: Yeah I think we all love the franchise and we all got together. I was happy and surprised they got Bill Murray to do it. But they did.  It was nice to come together again and put something out there for the fans. I wish we could have followed through and did the third movie. That has yet to happen but it was great being a part of the game and it turned out to be very popular with the fans and that’s good.

MP: You mentioned Ghostbusters 3. I know you can’t really trust most movie buzz going around but have you heard of a script or anything in the works?

EH: No I hear from time to time from Danny Aykroyd. I talk to all the guys including Ivan Reitman so I think everyone wants it to happen but getting everyone to agree on exactly what, that’s been the problem. I hope they can pull it together. I think the fans have been great, supportive and I think they are ready for it. They would love to see it.

MP: I had looked through your IMDB and saw a little known fact that you were up for the role of The Master in “Doctor Who”. How did you come across that? Are you a big “Doctor Who” fan?

EH: Well I think nice guys make the best villains and sometimes the villains can make the best nice guys. I think it’s very hard for an actor to get locked into a certain thing. I have done a number of movies where you play the other side. It’s always interesting and I think it would have been an interesting challenge to give that character a different dimension. Obviously me and Eric Roberts are two very different people. I love his work but it would have been interesting to explore that.

MP: I have noticed that in your roles you play a police officer a lot. In Miss Congeniality you play the director of the FBI, The Crow you play Sergeant Albrecht, and there have been several others. Is that a personal preference for you?

EH: No, most actors don’t really get into personal preferences. You take the jobs that are there and available in front of you. Actors talk about well I turned this down and most actors don’t turn anything down. There’s not that much work out there. A lot of times people will take my voice, my physique I’m sure it probably comes off very authoritative and that translates into authoritarian roles. Be it a principal, warden, whatever. The FBI guy, the CIA guy and so I think that’s where a lot of that comes from. I have been very fortunate  to play other roles. I think it has more to do with physicality than anything. I try to be as flexible and try as many different things as I can.

MP: I read that you like writing. What sort of things do you like to write? Screenplays, short stories, etc.

EH: I started out as a play write. I got a scholarship to Yale as a play writing student back in the 70’s. I still write. I’m working on Jack Johnson the first black heavyweight champion “One Man Show” I’m writing that. Still working on the script but hopefully I can get that out there soon. Writing was very much a part of my life for a while. Then I sort of got more involved in acting trying to raise my family. But now that I have more time, I want to get into that side of my career.

MP: I had one question about The Crow but I know usually that is a tender subject. Do you mind?

EH: No, no! Whatever it doesn’t matter. The Crow, if it was going to be Brandon’s last movie I am very happy that I was there and I have nothing but great love and respect for him and his memory. So I don’t have a problem talking about it.

“You still have your hat on.” -Eric Draven “The Crow”

MP: How did you come across the role of Albrecht?

EH: Well, I’m sure Brandon probably had a lot to do with it. I had known him for about 8 years and I know he wanted me to play that role. I thought it was a great role! I liked the character. I don’t think any actor knows how they get anything. How they got this part, that part. Maybe some who could say I got this from who knows what. As an actor, you’re out there and you try to get the role. I can’t honestly say Brandon got me the role. It could be any number of reasons.

MP: Did you ever read the comic books before you took the role?

EH: No. When I was a kid I read the Marvel comic books and some of the DC stuff but I’m not really into it. I was a single parent at 19. I raised 2 sons and so most of my life has been trying to keep a roof over their head. I never was much into the comics. I never read The Crow. Obviously once I got the role I got into it but not before.

MP: One last question just kind of out there. Fitting with Ghostbusters, do you actually believe in ghosts?

EH: I believe in the possibility. I can’t sit here and tell you that I saw a ghost clearly last night and they said to say hello. I think there are other dimensions around us that we are yet to understand or even be able to comprehend. It’s like a computer. If you have one of those old computers that are very limited, it can’t process the newer stuff. Because it doesn’t have the capability. We have 5 senses and that’s it. I believe the universe is infinite so who knows how many other senses there are. In our realm of 5 senses it doesn’t exist. I think it would be very foolish to believe there is not something else going on. So I believe in the possibility but it’s not something that I go around in pursuit of. I’m not fascinated by it. I figure sooner or later we’ll all know for sure. 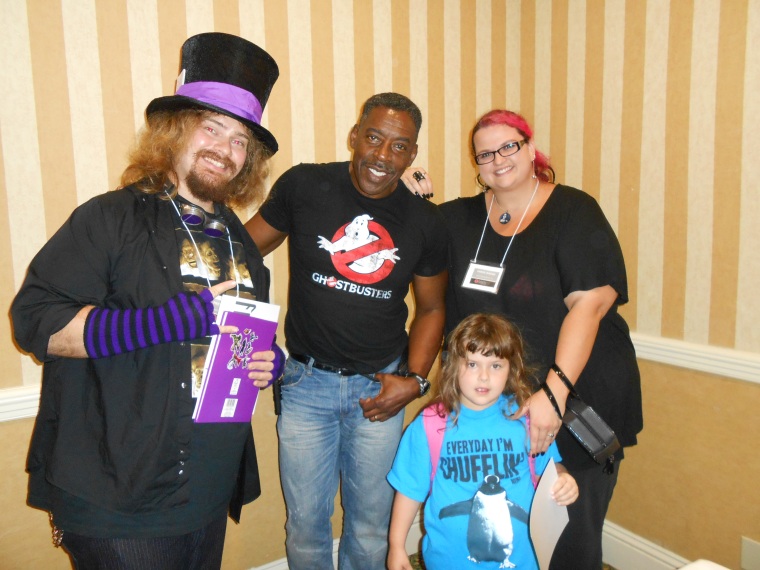 The Psychotik Family and Ernie Hudson

Wasn’t that just….OH MY GOD ERNIE HUDSON!!! Well I got that out. I really do hope I never loose that light when I meet a celebrity for the first time. Such a good feeling. The ironic thing is of course in most cases I’ve met the actually character they portrayed. That is a story for another time though Darlings. One does not explain the multiverse in one sitting…Tomorrow I will have so HHN 23 updates. Catch you up on all that has happened. I ask all of you to keep Andrea Albin of ADA Management and Promoter of Fatality Fest in your thoughts, prayers, or what ever you do individually to send good vibes. She was in a car accident last night. Now from what I hear, she is okay. She just needs some recoup time. I’ll keep you all posted. She’s a fighter though! That lass has got a lot of moxie and I don’t think she will let this keep her down for long. Get better soon Andrea…