I owe this to my woman. Some may not know this, but I’m a severe arachnophobia. I can’t handle the things! Just something about them, I don’t know. I thought long and hard about posting this story. However, I decided that I’m OK with admitting my phobia, and I’m OK with admitting what an awesome wife I have!

So this is what happened. We were heading out to run some errands yesterday. Seras and the baby head down stairs first oblivious to the thing that lurked less than a foot from where they passed. I came down after them and what did I see down that stairwell? A huge wolf spider hiding in the corner. It froze me! I couldn’t move any further! So I called to Seras down stairs. She put the baby in the car, then came to talk me down. This is the first time a reaction this strong has ever happened. I came down the stairs, slowly as not to get it to do that sick scudding thing they do. Every step I took though, I came closer to a full on panic attack! I might also want to mention she told me there was another spider around the corner on the wall. This is the one she thought I saw. Boy was she shocked to see the over sized eight legged demon in the corner. She told me about the little one, but I don’t think it registered she meant the same type. So I stuck to the wall and made it down the stairs. She grabbed my arm, and I went to round the corner, only to face down another one legs spread wide. I think it was instinct that took over. I grabbed hold of her arm and ran down the stairs with her attached. I know how terrified I am of them, and I’m not about to leave anyone while I run away. That being said, it took the next half hour for me to calm down from the attack. During this time, Seras told me she had no problem killing them. She wasn’t about to let them terrify me, and she didn’t want to risk one of them getting ahold of the baby (No need to have two  arachnophobics running around). So we go do our thing, get our groceries, and a very large can of Black Flag. The next part of the story is the epic battle of how Seras has earned her title.

When we get back, Seras says she is going to go up stairs and scope it out. She takes her trusty can of spider death and enters the arena. The big one, we will call this one The Boss, was near the arch of the stairwell out of reach. His lack was busy guarding the steps on the second set of stairs. Seras quickly drew her weapon and fired! She hit it so hard there was puddles of the stuff on the steps!! Next came the Boss Battle. She went up to the apartment to get a broom. The plan was to coax it down the wall, so she get blast it. The Boss wasn’t going down without a fight. She threw the broom at it a couple of times, and all it did was run in circles. I by this time, was brave enough to help get the broom back up to her. The last time she tossed the broom, it hit next to it. Well at the same rate the broom fell, it ran down the wall. Right as I went to pick up the broom, Seras yelled, “Baby, Run!!” As I looked up, it rounded the corner and I had a Close Encounter of the Eight-Legged Kind! I swear I could count the eyes. What did I do? Well I did what she asked, I ran! Not wanting to be ambushed she asked me if it was still on the wall outside. I looked and saw nothing. The only thing I could guess is it ran into the mail drop (Boy would the mail man have had a surprise). With the coast clear, she proceeded down the steps. It was an ambush! The Boss ran at her to make one last stand! She drew her weapon and fired! He kept coming!! Around this time, the neighbor came from his apartment to see what was wrong. He ran up the stairs and offered the assist. The Boss was defeated. All was well in the world. We brought everything upstairs, and calmed down.

What did I learn from this experience? Two things: 1) Seras is the best wife an arachnophobic could ask for 2) The reason giant-ass spiders exist, is to remind even the biggest, toughest, strongest manly man out there, at heart, your still a prepubescent 13-year-old girl! 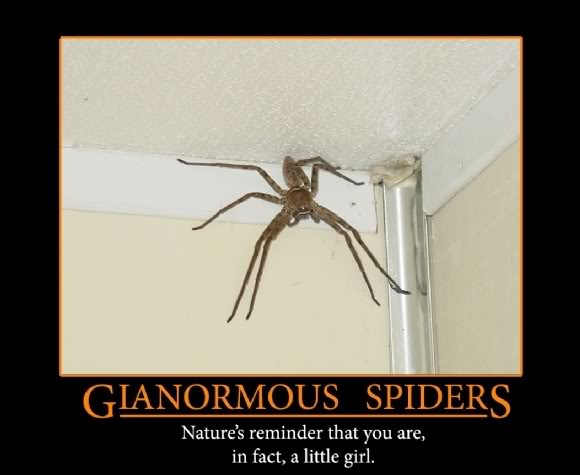