So the summer movies are still rolling out. While this review is late, i still feel it’s necessary. I remember getting up from my theater seat and saying to myself, “I need to put something out there because purist fan boys and girls are going to try to fuck this up for everyone.!” So far I’ve not seen a too negative of an impact. I could be wrong. I tend not to regard many people in high regard to their opinion on a film. Especially sites like Rotten Tomatoes (Sorry I know blasphemy! I don’t care!) Really all a review is for is just to give you an idea as to whether you will like it or not. Find a reviewer you share an opinion with and go with that. These mass review sites are no good because the internet, unfortunately, has no shortage of trolls that will try to slam a film because of an actress or because it’s a fad they don’t like. That is a travesty and is an absolute crock of bull shit. Stupid fleshly little meat sacks! Anyway….let’s take a look at this gran beauty called Maleficent. 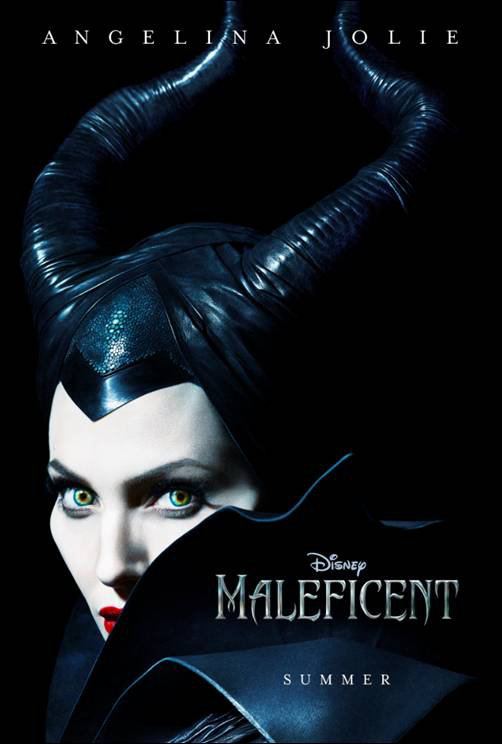 So this new movie that Disney has brought to us takes the classic tale of Sleeping Beauty and turns it on its head. Don’t go into this film thinking that you are going to know everything about it. You won’t. This story starts a lot earlier than the birth of Aurora. Mostly because this is not about the princess. This is how the evilest faery became who she was. Maleficent is a story of love and betrayal. The film starts when Maleficent is a child living in the moors, the faery kingdom adjacent to a human kingdom. For years the humans hated the faeries and were not allowed in the moors. One day a human peasant boy by the name of Stephen tries to steal some gems from the faery world. The gems are recovered and Maleficent takes him to the edge of their world. They shake hands and his iron ring burns her. She reveal that iron hurts faeries and young Stephen throws the ring away. This act of kindness is so profound to young Maleficent that she starts to sort of fall for him. The two see each other for years and blossom a wonderful friendship. It furthers to the point when Stephen gives her the gift of true loves kiss….or so she thinks

Years pass and the two distance. Stephen tries to further his dream of one day becoming the king finding his way into the royal staffing. Maleficent becomes the protector of the moors and soars high over the skies daily. The king of the kingdom to the right decides he is going to find out what lies within the moors once and for all and attempts a failed attack. Maleficent and her army of what can only be described as large tree people, fight the humans back and hurt the king in the process. The king then decrees that anyone that will kill Maleficent will marry his daughter and become king. So Stephen does what any friend does and warns her. The two spend a glorious night together in each others arms….Oh yeah, and did I mention the part where he drugs her and then takes off her wings because that is really important. When she wakes up she is beaten, betrayed, and destroyed. The once happy protector of the forest now becomes an evil ruler subjugating the moors and growing her power. It’s not until the birth of Stephens daughter, Aurora, that the two face each other again. This is the part where she curses the child and storms out!

Now we are at the story you…..wait….nope Story still takes a left turn….more about that below…spoilers.

Dear Cthulhu, so many things are going right for this movie! I don’t even thing I can categorize it. The story, the casting, the music, the visual effects….just wow. This is a fantastic little ride that Disney has put together. The story is fresh…I like what they changed. The fact that Maleficent is drawn to the very child she cursed. That you get to see the duality of her character. You see her good and innocent…then you see her betrayed and wicked…then you see her come round again to just being a hero. It’s an interesting tale of the Hero that was also the villain. The fact this was a retelling I believe made it better. The fact they thought way outside the fancy box on this film is what impresses me most. Seeing her heart warm to the very thing she hates…was just awesome. Also I love that Disney is moving away from the princess being saved by a prince. The fact that True Loves kiss came from Maleficent. That True Loves kiss can come from a “motherly” character was the most impressive point.

Really there weren’t any I can think right off the top of my head. I loved the whole thing. It’s just good ride…go see it.

Nothing really horrible to say about this. So we have ourselves a 5 out of 5 Top Hats. Go right out and see it if you haven’t. It’s probably on its way out of the theaters, so quickly. Just a really great movie and I do hope Disney leeps continuing with films like these.

This entry was posted on June 12, 2014 by malicepsychotik. It was filed under Reviews! and was tagged with Angelina Jolie, Disney, Maleficent, Melficent, Preincess Aurora, Sleeping Beauty.