Hello Freaky Darlings! It’s time for another movie review. I had planned for this to come out a lot sooner. As a matter of fact, I hd a lot of things planned to come out, but this month has not went as planned at all. Plus in the light of Friday’s tragedy, I felt it in bad taste to try to compete with headlines and what you would consider “real” news. On the other hand a good friend and Psychotik Girl that you will all love to meet very soon, Cyanide LaMorte, maybe a little relief from that sort of news isn’t such a bad thing. It’s important to learn the facts, but the media has a tendency to beat you across the face with their dick about it. Keeping that in mind, let’s talk about an awesome president. Let’s review… 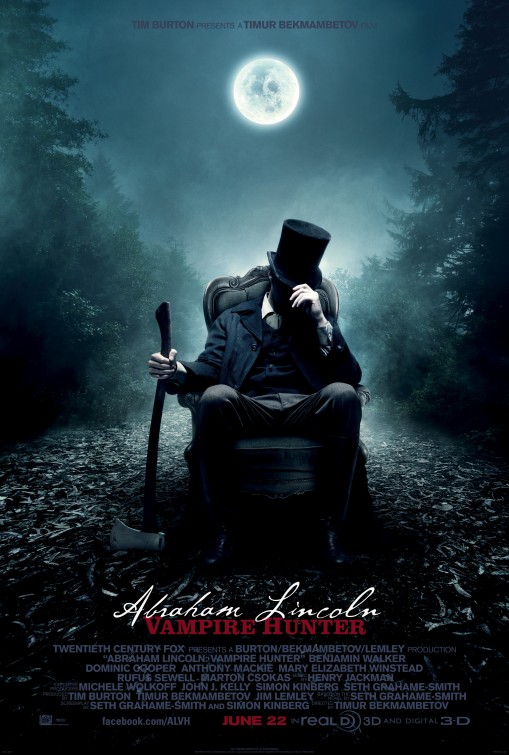 I was soooooo excited when I saw this book was being made into a movie. Such an original concept here. And what a way to get people interested in history. Let me give you a brief summary of the movie. The film (and book) tell you the untold story of Abraham Lincoln. You see history only tells you a small part of the tale. History doesn’t tell you the story of how Honest Abe was a vampire slayer…or the real truth behind the win at Gettysburg. The story is told through the eyes of Abe Lincoln from a young age right up until the night he was shot in Ford’s theater. Lincoln was pretty well thrust into the role of vampire hunter when he witnessed his mother’s death at the hands of one. From that day forward he devoted his life to killing the vampire that took his mother. When he finally is able to kill him, he botches it and is saved by Henry Sturges (A vampire but you don’t know that…yet). Henry takes him under his wing and trains him to become a vampire killing machine. That’s all I’ll leave you with here because you really should watch the movie.

***WARNING! FROM THIS POINT ON THERE WILL BE SPOILERS***

Oh, man where do I start…The visual effects were top-notch. The story is above and beyond fantastic. The casting was really great. Everywhere you look there is something you will love. I’m sure what most vampire fans in general will enjoy is the return to dignity with the vampires. When they are not vamped out, some of them are very gritty seedy looking people. The higher up vampires of course look better dressed but they still retain the creepy air. When they vamp out, your met with a face full of razor-sharp teeth with no remorse.  The level of detail in intertwining history with fiction is also a big plus. If you are a history buff you will enjoy yourself. If not, then you will be intrigued enough to look for more info. I think my favorite instance was the explanation of the Civil War and how it was won. In the movie, the reason the South started their winning streak just before Gettysburg was the addition of vampires to the battlefield. To even the score, Abe amasses silver for the Union forces so they are properly armed. Last pro I will offer is the film looks damn pretty. It’s really hard to describe it further than that. The movie just has this quality of keeping you paying attention the whole way through.

I really had to think about this one. My only real big problem…The movie moves to fast in some areas. A few areas in general just feel rushed through and give you the feeling that their was more to be seen here. This may very well be because it’s adapted from a book, even still though it’s kind of obvious and you can’t miss it. I can’t really thing of anything else that bothered me, but then again I’ve not read the book. Maybe once I read it, I’ll go back and visit this again.

Taking all of that into consideration, I give Abraham Lincoln: Vampire Hunter 5 out of 5 Top Hats. It really is a good movie, go see it if you haven’t. You will leave impressed. That’s will be all for now Freaky Darlings. Stay tuned for more to come soon. This time I won’t make any promises as to whats next or when…just keep an eye out.

This entry was posted on December 16, 2012 by malicepsychotik. It was filed under Reviews! .