A Modest Proposal…(Not about eating babies)

Not a True Story…lol

Until Next Time, My Freaky Darling,

Hello, My Freaky Darlings! I’ve had a crazy last couple of days. In those couple of days I managed to watch…Human Centipede 2. That was really not the most constructive things I’ve done either. Let me say first, I pride myself on the ability to look at movies objectively. I used to be really bad about saying, “If you don’t like such and such you don’t know what a good movie is!” I’ve grown past that and am now able to look at it from the other side. Normally, I can look at a movie I like and see why others don’t like it. I can also see it from the other perspective if I don’t like it. Not this one. I had such high hopes for this one. There was pretty good buzz about this flick passing it’s way around the internet. Let’s just say, I learned a hard lesson in not believing the hype. I have so many things to say, and I’m not sure any of them are “good.” I think first though, before I share my full opinion on Human Centipede 2, I should share my feelings on the original.

I went into this film with the highest hopes. A horror movie that had not only a disturbing concept but was also medically possible! What could go wrong? Apparently a lot! One of my biggest problems with this first film is how the film drags on. The story really doesn’t focus enough on elements that would have added depth to the story, and too much on explaining the procedure. It’s almost like, as cool as it was that it could happen…it’s not necessary to the story to know every detail. I was also annoyed by the fact that you never know “why” he wanted to make a human centipede. What purpose was there? This German Scientist comes up with the process and everything, and there really is no purpose. Oh, and before anyone says, “Well that’s what makes it scary! Not having a reason! He’s just a nut case!” BULLSHIT!!! That’s a copout and an excuse for poor writing. In My opinion, that only further discredits the film. I just could never understand how you could go through all of the reasearch to make the film medically possible and write as poor of a story as this film had. You didn’t even have character development for crying out loud! Eli Roth had more character development in Hostel and horror critics tear that movie apart. Yet somehow, the critics all band behind this movie…it’s rediculous. On the Top Hat scale, I give this one 1 Out of 5 Top Hats.

Now for the main Article… 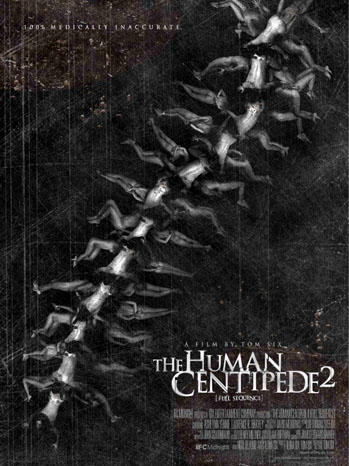 You know I really don’t know where to start. This movie was just so damn awful! A total train wreck! The only reason I kept watching was because I couldn’t look away. There is just so much wrong with the whole thing and it doesn’t even matter what your vantage point may be. Let’s just dissect this thing already! Starting with the plot and story. On paper it sounds like a really cool idea. I wondered when I first heard of a sequel how they were going to do it. The original wasn’t really set up for a follow-up, but hey I’ve seen people do more with less. Yeah…looking good on paper is about all the idea was. The plot follows mentally handicapped and sexually abused Martin, a parking garage attendant and Human Centipede fan. More obsessed than anything, it strikes Martin that he should make his own Human Centipede. That in mind, Martin starts gathering victims from the parking garage. Even goes as far as to acquire a room for his “experiment” (killing the landlord in the process.) But how is he going to make his creation with no surgical tools or knowledge? Oh…well we will get to that in a moment.  Sounds like a good movie huh? Let’s peel away the sugar-coating shall we?

The only thing that saved the original in the slightest with me was the realism. The procedure was medically possible! It could be done with the right know how. With this movie you no longer have the freaky mad scientist. NO! You have a short, fat, mentally handicapped dude that shits his pants, and wanks with sandpaper (Yes, I’m not kidding he jacks it with a piece of fucking sandpaper!) He doesn’t even talk, the most you get is a squeal. The whole element of reality is lost completely through the whole film. Nobody ever looks for the disappeared people. It seems like he’s the only one that ever works at this parking garage. All of the people he captures he either shoots or beats about the head. Their is so much blunt force trauma in this movie, the only centipede he should have made was a mashed centipede. Don’t get me started on how the centipede was made. The only scientific part seemed to be when Martin found out if he tried to do it right with what he had (cooking knives, duck tape, pliers, a hammer, and more duct tape) the person would die and bleed out. Speaking of bleeding out , everyone of the people in this “experiment” have been, at this time, beaten over the  head, stabbed, and/or shot. They have all been left alone in a dark room with no food, no medical attention, and no clothes for days. I’m really not sure how they are living at this point. The only ones that die are the ones he kills during the “procedure.” Anyway, back on track. Once he finds he can’t do the deed accurately. He then stretches each of their lips to what seems to be unnatural lengths, somehow effectively stapling them all ass to mouth. How the staples hold up as long as they did I’ll never know. Most staples I’ve had the displeasure of working with pull right apart! Not to mention the fact there was no way the stapled bent over to hold. They should have pulled out with no effort at all. In the end, he only really seems to have created this…I’m tierd of saying it…his “Beast of 12 heads up 11 Asses,” is to make it shit. Which, by the way, with the addition of laxative he achieves his goal…in record time! He manages to send a turd from the head of the beast, to the back in 1 miuete. To sum it up, we have traded science for the horror equivalent of dick and fart jokes.

Next, I figure we can talk about the action and characters a bit. To sum up the characters, you don’t know shit about them. And you know what? You don’t care either. You have Martin, whom I’ve already described to you. Then you have his abusive mother, the sexually abusive voice of his father in his head, his sexually perverse doctor, and his pet centipede. Did I mention the people that become the centipede!? You know nothing of these people other than face value. Why is that you think? Oh yeah, maybe because the director doesn’t give a crap about them and as far as he is concerned, neither should you. As far as action, you have a lot of gore but it is all very repetitive and not that interesting. Besides why should you care!? You know nothing of any character in this movie, and therefore have no stake in what is going on. No killer to love, no victims you want to watch die…or visa versa! In the words of Willy Wonka, “YOU GET NOTHING!!! GOOD DAY SIR!!” Before I leave the topic of gore and go to the final verdict, let’s address one scene in particular. There is a scene in which the pregnant woman who you think is dead springs back to life. She goes running like a bat out of hell to a car parked outside. You realise, the reason this particular woman has sprung back to life is she’s in labor. Well, she gets in the car while Martin (covered in shit and blood) chases behind. When she gets to the car…Wouldn’t you know it…sum bitch won’t start. This is when it get REAL stupid. The woman pauses for a minute and starts to push. A few screams later, the baby plops out crying in the floor. Instead of her picking the child up, what does she do? If you somehow guessed turns the key and stomps the baby’s head into the gas pedal leaving a bloody gooey mess in it’s wake…then you guessed right! Congrats! Your as fucked in the head as our dear director Tom Six. Kindly put this pipe leading to that running car over there in your mouth and breath slowly. Your prize will come shortly (Ha Ha Ha! I kid….no not really…your a sick and twisted little screw ball…and you shouldn’t be allowed to procreate!) BACK ON TOPIC!!! After the woman does this, it’s as if smashing a baby’s brain into the floor board is the magical spell to start a car, BECAUSE THAT’S WHAT DOES IT! What did that part bring to the movie? Why was it there? Was he high when he wrote this? Was he reading a dead baby joke? This brings me to my closing thoughts…

My conclusion is this, Tom Six is an awful director. I’m serious, the fact this man let this movie see the light of day has made me lose what ever shred of respect I had for him to start with. It’s as if he sat down to write the script for this movie and said to himself, “Well, I already have a fan base. So what ever I do they’ll like!” That was when he stroked his dick and thought of the most random sick and twisted elements he could and tossed them into one movie. This movie has made me want to revisit other movies I had been rather harsh on in the past. You know, give them another shot! For now, I have seen what a horrid movie looks like…and this is it! The Psychotik Review rating I give to this big mud monkey is -2 Top Hats out of 5. Yeah that’s right, negative 2! I want my life back that I wasted!!! Don’t waste your time on this garbage. Your support is better appreciated with people like David Madison and Thomas Churchill.

That’s all for today my Darlings! Sorry for the gap. As I said on the Facebook, I’m in the midst of an eczema break out and the hands don’t work so well. Thank you to those of you readers that expressed concern and good wishes! I love you all, and you’re the reason I keep this site a float. Have a good night!