Why hello there Freaky Darlings! Dear me, the recent experiments have been keeping me away! On a brighter note, things should pick up soon around here as I have wired together an interesting substitute for a broken lap top. (Can’t use Cheshire cat magic all the time kiddies…takes the adventure out of life!) Any how, we have a movie review from my dear vampire sweety, Seras Psychotik! We sat down the other day to a remarkably funny cheese fest in the form of Jersey Shore Shark Attack. I considered it to be pretty good for what it was. But this isn’t about what I think….Let’s see what Seras has to say… 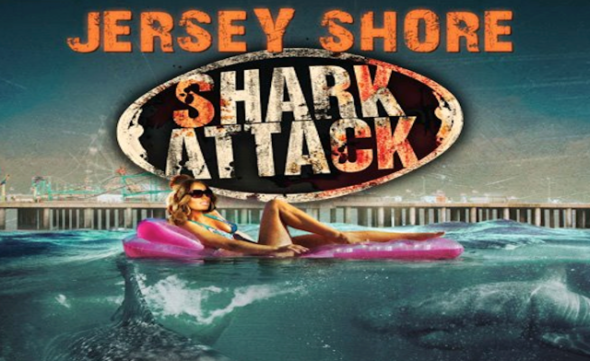 The Jersey Shore Shark Attack is an Anchor Bay film released in 2012 that is a parody of The Jersey Shore reality television series and JAWS. Yes I know it sounds corny but proved to be quite humorous. Vinny from TJS stars as a newscaster for News Jersey Live. Other stars of TJS are parodied as follows: The Complication aka TC (The Situation), Donnie (Ronnie), Nooki (Snooki), Paulie Balzac (Paulie D), J-Moni (J-Woww), and BJ (Deena). The only star not parodied is Sammie. Guess they weren’t a fan?

TJS acronym GTL (gym, tan, laundry) becomes ASS (alcohol, sun, sex). Not that it’s any different from what they do on The Shore lol. So early on as the film opens you get to see the sharks that cause all the problems. Albino Bull Sharks. White with blood-red eyes. This species of shark generally stays far out in the ocean but are attracted to vibrations. Mayor Palantine (Paul Sorvino), has approved a development on the Jersey Shore that includes underwater drilling thus drawing the albino bull sharks to shore on the 4th of July.

First kill in the movie is very JAWS like. A man out fishing on a small boat is attacked. Immediately, you can hear the squib hiss as blood comically pours and squirts from his neck and upper torso areas.

Things get crazy when there is a “misunderstanding” between the Guidos and the JS Blue Bloods or preppies we’ll call them. A friend of TC, Donnie, and Paulie goes missing after jumping in the water to escape the pursuing preppies. When he isn’t seen again and doesn’t return calls they become concerned and the entire JS gang takes matters into their own hands to find out what happened.

After they enter a restricted area the gang come across a human torso and then the fins begin sailing through the water right at them! A decision is made to steal a boat belonging to head preppie Bradford (Grant from Secret Life Of The American Teenager). Sharks are spotted so they begin lighting fireworks to toss at them. Donnie clumsily drops a lit firecracker into a bag full of them and consequently blows up the boat!

No one will believe them that Seaside Heights is crawling with the deadly creatures. 4th of July festivities begin and as Joey Fatone formerly of N Sync prepares to take the stage they try once more to make someone believe. Joey simply laughs in their face and takes the stage. Joey dedicates a song to all the ladies but before he even begins singing, a shark flies across the screen devouring him!!! Now people believe. 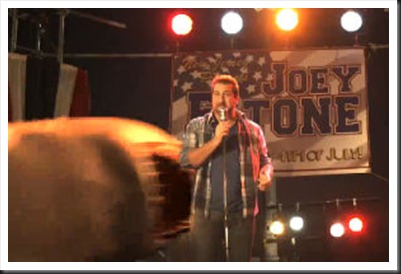 You know, they used to just use Sheppard rods or a gong to get a bad act off stage…I’m for this…J/K…We love you Joey, ya’ crazy Italian Bastard!- Malice Psychotik

One shark is caught and a mic found in its mouth so the mayor is happy to say the shark that ate Joey Fatone is dead and there aren’t any more. He was wrong. So as not to give too much more away, you get to see Nooki beat a shark over the head with a boat paddle which is amusing.

As we come upon the climax of the film, the sharks have banded together to take down the pier. Police start clearing everyone off but of course there are casualties. Brave TC runs out onto the pier where the drilling was being done and manages to shut off the drill. Immediately, the sharks begin heading back out to sea. Newscaster Vinny is excited to report that the Shore is once again safe. Just before a shark flies across the screen and eats him. RIP Vinny. The Shore won’t be the same without you.

My personal scoring of the film is 4 out of 5 top hats. It was very entertaining and kept my attention throughout the entire film. Remember, it’s a parody.

You should really go out and rent this if you can. It’s pretty good for a laugh and entertaining enough. Whether you love The Jersey Shore, Hate The Jersey Shore, or just plain want to see a shark movie…I’m sure you will love it. Stay tuned for more madness to come!