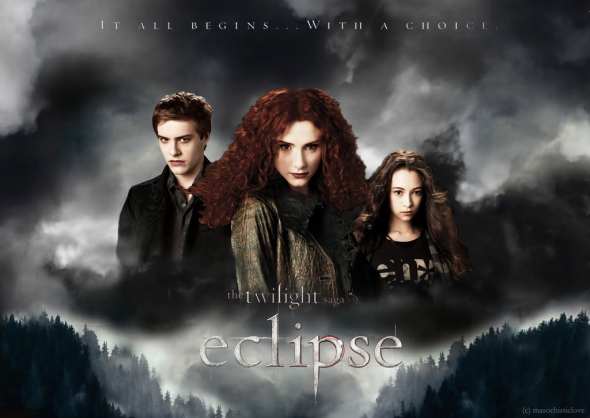 I know there are posters with the main three....again outside the norm...

I have stewed over whether or not to review this movie for about a month now. I know how its a sensitive subject among die-nard horror fans. You know what though? I have never been one to follow “social norms,” so why start now? Usually, I consider the Twilight Saga a “guilty pleasure,” but this third installment really impressed me. This movie really stands out against the rest. I believe the biggest reason for this, is because there is a lot more action! Way more than in the others, thats for sure.

Eclipse opens in a way that was very out of the norm for these movies. It started like a  freakin’ horror movie to be honest! Within the first five minuets you have a kid stalked, chased, and bit. This really starts to set the tone for the movie. Of course then it moves into the basic story line of the series.  Bella is in love with Edward, but Jacob wants her too….I could go on but if you’re a fan you know it and if you aren’t you aren’t interested! Moving on! The main plot in the movie (not the book…the MOVIE) is a woman scorned vampire Victoria is creating a vampire army to kill the Cullens. Really all she even wants is Bella. Apparently she’s still a little tweaked because Edward killed her main squeeze to save his. I mean all her James did was try to kill Bella for no other reason than because he was bored! (I mean thats normal right? Whats Edwards problem? Pssht!) The MOVIE (see there I did it again) really doesn’t dwell on the love story, and I don’t really feel it needed to. There are only so many ways you can show that Edward loves Bella and she loves him back. But the little doggy (Jacob) wants some but can’t. This really is left more as a sub-plot. There are some funny scenes of the two (Edward and Jacob) butting heads,  but really that’s about all I want to touch on that. Let us just dive into the positive parts shall we…..Some how I feel I’m loosing your attention!

Where do I start with the action? Well, it is worth mentioning that there is a mass feeding scene with all of the new vampires. You really get kind of surprised by it, as your really not expecting it! It’s kind of like “Oh laddeedadeeda….” “I SAID BE LESS DISCRETE!! (kicks a new-born) ((Cue another new-born smashing in one’s head to take his human)) There is even a dark back story to Jasper. A back story filled with him turning children to vampires, letting them live for a year, then breaking their necks! I scared everyone in the theater because I laughed! (Then again you are talking about the same person that goes into a giggle fit when he sees Anakin with the Younglings….”Master Skywalkers here! We’re saved!” snicker…chuckle). Hell, you even get to see more of Dakota Fannings dark side….she torchers a little girl and then has her killed (and you people called this a tween movie!?) This of course is just icing until you get to the big fight scene. In this scene you get to see the New Borns vs. The Cullens/ Wolves slug it out in a battle to save all humanity! (Ok not really just Bella and the rest of Forks…..but I digress…) I really didn’t think they were going to deliver as well. I mean what does a sparkly vampire do when you kill it……Apparently it smashes like the disco ball they look like! Yes you heard right they smash like a mirror! This effect looks cool as all get out, I really couldn’t get enough of it! Surprisingly, this scene got it’s point across without a drop of blood. In some cases it even made it worst then if it had all the gore!

I would like to also touch on the visual effects. This movie really delivers in the effect department. The vampires actually look really cool. The new-borns really sell as a pack of ravenous, blood thirsty, killing machines! To top that off the giant wolves just look….well cool. The graphics aren’t bad (Blurred running, wire work, CGI, vampires shattering….). Way better than the previous two. The scenery is pretty note worthy as well. (I’m a sucker for location). So where did I think the movie fell short? (I know you two in the back were waiting for it, I knew it!) 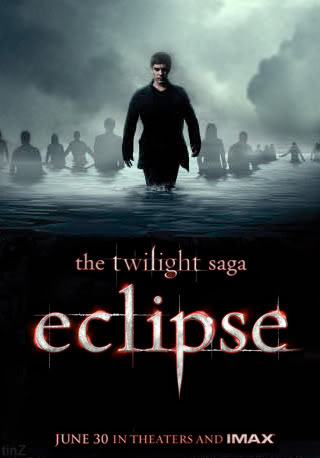 OK the scene this comes from just had me thinking Land of the Dead....

I think there could have been a tad more blood. I do know that they have to keep the PG-13 rating, but that is going to go right out the window in the next one anyway. Put your big boy pants on, and show me some blood. Your getting there, but I feel you came just short of the full-monty. Finally, whoever has the shaky hands…..GET THEM OFF THE CAMERA!! It was only in one or two scenes but was really bad, and highly unnecessary….

So what do I give the movie? Well I had some problems with it, so I don’t feel I’ll go all the way. I give it 4 out of 5 Top Hats. If you haven’t seen the movie, I implore you to give it a shot. I really feel you can’t give an honest opinion unless you see it for yourself. So many good movies get grossly over looked for no reason other than “Everybody else” said it wasn’t cool.