Posts tagged “Days of the Dead”

Waking The Dead With Melissa Cowan

I’m such a lover of zombie films! I think a lot of it come’s from how they used to scare me as a child. (Hell beyond Spiders, they were the only thing that scared me on film as a child!) So when i get the opportunity to meet or interview a person that was in one of these films, I consider it a real treat. Today I get to show you one of those treats in the form of an interview with “The Walking Dead”‘s Melissa Cowan. Melissa has become quite the rising star in the Horror Con circuit. With Multiple convention appearances, photo shoots, her acting, and being a fantastic mother of two I’m lucky to have gotten the interview at all!! Honestly though people, to get to speak with this woman for any amount of time is to meet a truly lovely human being. So, it is with great pleasure I bring you this interview! Grab your shovels, because tonight we are going to be…

Waking The Dead With Melissa Cowan 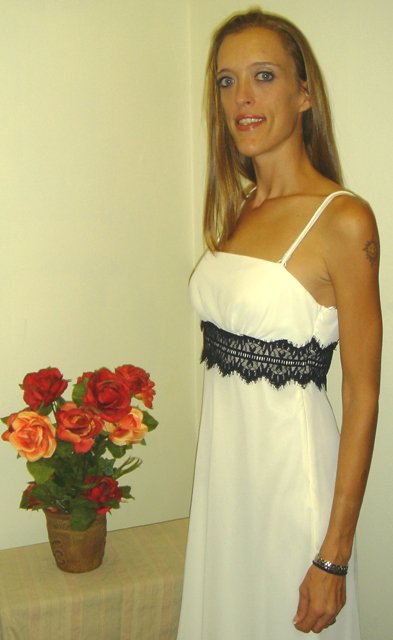 Malice Psychotik: I’m here with Melissa Cowan of “The Walking Dead,” AMC’s new series by Director Frank Durabont. Melissa, your role as the “Bicycle Girl” has been causing quite the buzz in the horror community. How has that been?

Melissa Cowan: This has been an amazing experience. I had no idea that there would be so much hype and anticipation regarding my role as bicycle girl. I am thankful for the opportunity and all that has happened as a result of this. This has opened up the doors for me in ways that never crossed my mind, I am honored to have been apart of this and will forever be thankful. So obviously, there is a permanent smile on my face.

Malice: Your make-up in the press pics looks just…awesome!! About how long did it take to get in and out of?

Melissa: All together about 4.5 – 5 hours which is including a few breaks and it actually took another 2.5 hours or so to take all of it off. There were a lot of pieces, glue etc…  In my opinion it was easy sitting there getting it applied to me, but as PITA to have it removed, just think what it would feel like to have hundreds of Band-Aids ripped off of your skin, from you arms, neck, stomach back etc….  OUCH!! LOL

Malice: So how exactly did you come across the role?

Melissa: Actually an extras casting company that I had been doing work with for about a year and a half contacted me requesting pictures, they had mentioned it was for a zombie role, however did not tell me for what show or the extent of it. Obviously I sent in my pictures, didn’t hear anything for 2 weeks, then one day got a call for interview/audition. Went in and interviewed/auditioned with Mr. Frank Darabont it was “love at 1st sight” and the rest is history.

Malice: As the first zombie in this series, you’re joining the likes of other first zombies like Bill Hinzman. Do you consider it an honor?

Melissa: Absolutely and I can only hope that I will have the success and adventures that they have, I hope that I can live up to my expectations and please everyone.

Malice: I’ve heard rumors through the ether that you may be getting more screen time on the show. Is this true? Maybe a back story or another part?

Melissa: All I can say at this point without breaking any confidentially agreements, is that yes if you look closely at some of the pictures and video footage that has been released you will see a familiar face. I also will say that I did enjoy working on this production as much as I did. J

Malice: So other than the walking dead, do you have anything else in the works?

Melissa:Yes, There are several interviews, photo shoots etc and also a few new projects that I am in talks of, can’t really elaborate on anything now, but all in due time. ;-P Also, as stated previously, I have been in about 6 TV shows and about 13 movies, most of which I just did background work, I did do a few “featured” roles within those. The next biggest thing that I have done compared to TWD, would be The Vampire Diaries, I was a tomb vampire, unfortunately for me the way that the show was edited etc, I was not “visibly” recognizable, due to lighting etc…. BUT, there is a “possibility” that I will be going back this season as a vampire, still waiting on the phone call, so I am very hopeful for that.

Malice: Are there any past films or shows that we should look for you in?

Melissa: Again, as stated most of these I work as an extra in.

Life As We Know it – neighbor

Life as we know it – funeral mourner

Malice: What convention appearances do you have lined up? I noticed you have one at Ultimate Horror Weekend?

Melissa: As of right now, I am confirmed for the following:

Check out the site here or the Facebook here

Check out the site here or the Facebook here

Check out the site  here or the Facebook here

There is some more that I have been asked to attend, however I this time I am waiting on all of the details etc, but I should have all of that info posted soon.

Malice: Melissa if you don’t mind I would like to talk some about you. Tell me a little about yourself.

Melissa: I am 29 years old, married with 2 kids. I live in Covington GA. I helped manage a staffing agency for 5.5 years before getting into this work. I quit my job to stay home with the kids after an incident happened at my daughters day-care, started doing this work just to get out of the house and also for extra money. As time went on, I started getting featured roles and “better” things than just extra work, little by things started to go in the right direction for me.

As you can see I am one of those ‘feel good” stories about an “extra” that was able to make a name for myself. I take pride in knowing that all of this didn’t happen because I knew someone or whatever, I can honestly say that I worked my ass off and it’s all starting to be worth it.

This has been an amazing journey for me, one of which I PROMISE is not over, I am thrilled to have the opportunities presented to me that have been and can’t wait to be able to share more news with everyone, when the time is right!

Malice: What do you do for fun? Any Hobbies?

Melissa: LOL, after reading this question I sat here and started thinking and realized that no, I don’t.  LOL….. I know how to cross stitch but haven’t done that in a LONG time.

My family loves outdoors and animals so we do spend a lot of time doing things related to that, typically everything that I do somehow or anther revolves around my kids, which at times leaves very little time for “me.”

Malice: Are you a fan of the Horror Genre? If so what are some of your favorites?

Melissa: Yes, I always have been, more so when I was younger compared to now. I don’t allow my kids (ages 3 and 6) to watch “scary” movies or even “violent” movies, so unfortunately for me there is a lot of movies that I want to see that I haven’t been able to, I do try to watch some of the “off limit” ones once they go to bed, but as I said I have a lot of catching up to do.

When I was in High School I watched tons of “scary” movies, including zombie ones, I tended to hang out with the guys that were big time horror fans so we always watched movies after school and stuff.

Malice:What are some of your personal goals?

Melissa: First and foremost, my apparent goals are to keep being a good mom and putting my kids and family 1st, which pretty much goes unsaid. Then obviously to keep making a name for myself, now that I have broken out of “just an extra” I am excited about the offers that I have gotten and would like to continue making my dreams come true. Would like to keep getting bigger and bigger roles, things like that.   J

Malice: As tradition I would like to ask you a few “out of hat” questions. You ready?

Melissa: LET’S DO IT!

Malice: Have you ever had a paranormal experience?

Melissa: I don’t know if you would consider this paranormal or not, but one night when I still lived at home, before getting married and having kids, I was telling my nephew goodnight (whom was only about 5 or 6 at the time) and he told me to tell the “man in the closet” goodnight to. Of course I was a little freaked out and asked him what he was talking about. He goes on to tell me a name and describe what the “man in the closet” looked like. He described a guy that I was dating years prior before my nephew was even born; actually my sister was pregnant with him at the time that my boyfriend was killed in a car wreck. So when my nephew told me that name and what the person was wearing it freaked me out a little. I got a little emotional, confused, and angry that my nephew might have been playing a prank of me. My nephew goes on without hesitation to tell me not to be scared that he and XX talked all the time.

That’s about the extent of anything happening that I would consider paranormal. I do have some funny stories about me and some friends going to so-called haunted houses, which were anything from old vacant houses no one lived in to houses that were up for sale or rent. Some of these stories I still laugh at when I think about them today, one of my best friends and I actually laugh together about them some times!! LOL Maybe one day, I’ll have time to tell you one or 2!!

Malice: What’s the oddest Halloween outfit you have ever worn?

Melissa: Sadly, I can’t think of the “oddest” one, just normally do simple things.  LOL Boring I know!

Malice: Have you ever had one of those awkward moments were you would rather be having a drill boarded through your skull than to be in the situation any longer?

Melissa: Back when I was a teenager and having to listen to the same lecture over and over, just because I was dumb enough to get caught again. LOL

Malice: Well I would like to thank you for doing this interview. It’s been a real pleasure! Is there anything you would like to add?

Melissa: Just would like to thank all of the fans for the support, fan mail, etc… You guys rock! Can’t wait to start meeting you all!

Also I am in the process of getting my website up and running should be completed any day now. It is www.melissadcowan.com

Also I have a Facebook fan page as well. The link to that is here.

There you have it My Freaky Darlings! Be sure to keep an eye out for Melissa in “The Walking Dead” and in “Vampire Diaries.” I hope some of you have the pleasure of meeting her in October.